Woman hatches for an adorable pet 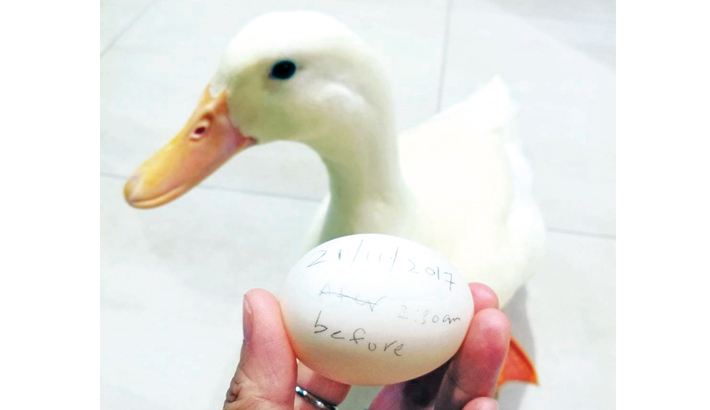 A Malaysian woman ended up with a pet duck after buying a fertilized egg from a restaurant and using a makeshift incubator to hatch it instead of eating it.

39-year-old Erica Lim, a creative professional from Kuala Lumpur, in Malaysia, recently sat down with online magazine Star2 to talk about life with a pet duck in a high-rise apartment building. She spoke about Daisy’s love of water, her friendly and adventurous nature, and how she adapted to life in the big city, but Erica’s most interesting revelation was the story of how the duck came into this world. Apparently, she was meant to be eaten as “balut”, a controversial Asian snack that consists of a cooked partially-developed duck embryo.

Erica bought Daisy two years ago, from a Vietnamese restaurant in the town of Puchong. Well, actually, she bought an uncooked fertilized egg used for “balut”. There was supposed to be a partially developed duck chick inside it already, but the woman was skeptical, so she decided to see for herself. But instead of cracking the shell, she took the egg home with her and put it in a makeshift incubator made out of a styrofoam box and some heat lamps. Two weeks later, she became the “mother” of an adorable duckling.

It’s unclear whether Erica Lim had ever planned to adopt the duck should the balut egg hatch, but after seeing that cute yellow ball of fluff break out of its shell, she fell in love it instantly.