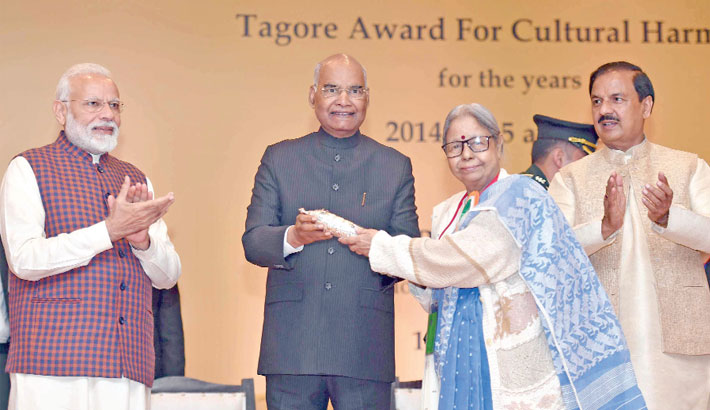 Chhayanaut has got the award for its outstanding contribution to promotion of cultural harmony and expansion of Tagore’s songs.

West Bengal and Bangladesh share a common culture and regard to Tagore’s ideals.

He said this award is a celebration of Indian traditions of culture and civilization in literature or music, art or drama, sculpture or handicrafts, design or digital art, etc.

“Each region in our country has a distinct cultural identity. Yet, in its essence, culture does not divide, rather it unites and harmonises all of India and all humanity,” he added.

He termed the presence of two premiers in a programme of a university rare incident.

“It is rare that PMs of two countries can be brought together for a cultural cause. Tagore is at its root,” he added.

He recalled that Tagore penned Bangladesh’s national anthem and praised Chhayanaut for propagating the poet’s ideals and cultural values across the world.

In her speech, Sanjida Khatun said India, by honouring Chhayanaut, has bound the cultural group in a bond of gratitude and inspired it to work harder in future.

Chhayanaut was born in 1961 at a time when Pakistan tried to control and regimentalise the art and literature of Bangalees, she said.

Pakistan tried to impose Urdu as the state language on the Bangalees. Many sons of this soil sacrificed their lives to protect the language on February 21, 1952.

Sanjida dedicated the award to the language heroes.

“This organization (Chhayanaut) was part of the movement for an independent Bangladesh that provided a platform for cultural expression and assertion of the Bengali identity at a time when such activities were considered anti-state and acts of sedition,” said a citation prior to award handover.

It also mentioned that Chhayanaut’s singers inspired freedom fighters and refugees during Bangladesh’s 1971 War of Liberation.

In the post-independence period, the organization continues creative ways to intensify the practice of mainstream music and culture.

The organisation upholds its liberal and progressive tradition promoting the spirit of cultural harmony, the citation said, adding Chayanaut has played a leading role in the promotion of Tagore’s work and Bangla arts and literature, not only within Bangladesh, but all across the world. “The Tagore Award for Cultural Harmony recognizes the contribution of the organization in upholding the liberal progressive tradition of universal humanism of Gurudev and in promoting the spirit of cultural harmony,” it added.

As part of the award, Rs1 crore was given to Chhayanaut and other recipients each.

Octogenerian Rajkumar Singhajit Singh, a leading exponent, choreographer and Indian classical dance guru and nonagenarian Indian sculptor Ram Vanji Sutar are two others who received the honour for the year 2014 and 2016 at the same ceremony for their contribution to promoting values of cultural

India introduced Tagore Award for Cultural Harmony in 2012. The annual award is accorded to the competent individuals and organizations for the outstanding contributions to the related field.