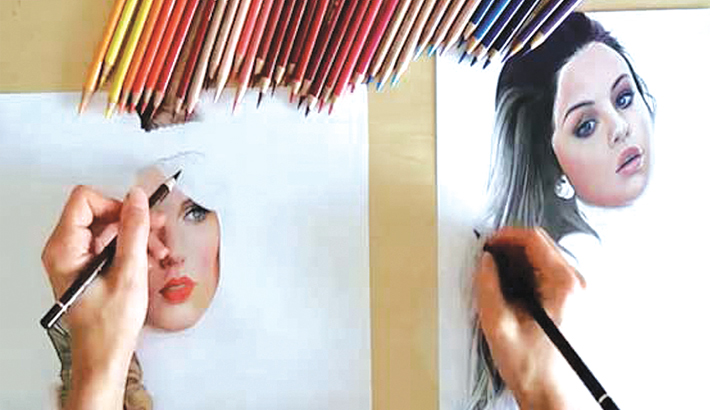 Rajacenna first made news headlines in 2010, as a child prodigy able to create incredibly realistic portraits of celebrities with a simple pencil. She has been honing her skills as a photorealistic drawing artist ever since, and somewhere along the way she discovered that she could draw just as well with her left hand as she did with her right. Not only that, but she could draw with both hands at the same time, somehow distributing her attention to two separate and completely different portraits.

I first wrote about Rajacenna in 2011. She was already making international headlines for her amazingly realistic-looking pencil drawings, not least for the fact that she had only taken up drawing just two years before. At 18 years of age, this young girl had already done modelling for various brands, had starred in films, soap-operas and tv-series, and had been the host of Kinderjournaal, the first Dutch web-tv for kids. Now she was turning out to be an insanely talented artist as well.

Rajacenna’s drawing skills have improved significantly over the years, but she also discovered another rare talent – drawing simultaneously with both hands. However, this ridiculously rare skill has been met with some scepticism online simply because people think it’s impossible. It’s one thing to draw some simple portraits or sketches simultaneously, but working on such insanely detailed artworks at the same time? It does sound a bit crazy.

“This is beyond ridiculous I would have to see video proof that she can coordinate one hand while focusing visually on her other hand,” Reddit user nogodones1 commented on a video of Rajacenna showing off her ambidextrous drawing skills. “I can understand writing two languages at once because the muscle memory for writing is more easily mimicked. To fill in a “photorealistic portrait” without downtime while shifting gaze seems to good to be true. She would have to have savant style abilities and without a video, Occam’s Razor says no.”

So far, all we have to go on is a few videos Rajacenna posted on her YouTube account, but if this skill turns out to be legit, it would make her the first hyperrealistic artist to pull it off.

One thing’s for sure, Rajacenna’s new skill is already drawing a lot of attention. Her most recent videos are being shared online, and Dutch national TV has already interviewed her about it.