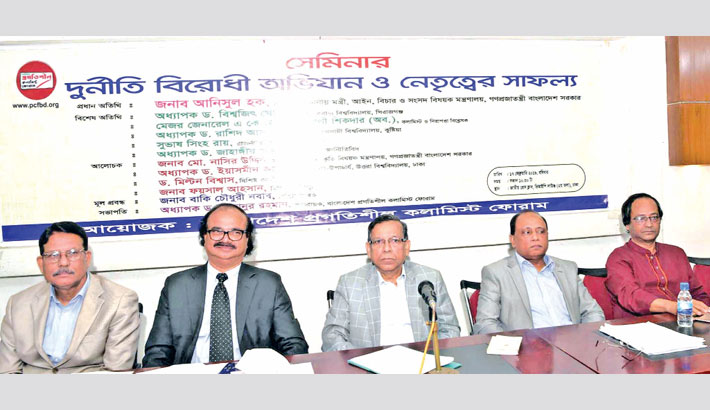 He suggested the anti-graft body to be more active and strategic to include people in its activities to curb corruption which is prejudicial to country’s development.

The law minister was addressing a seminar styled “Anti-graft drives and success” organised by Bangladesh Progressive Columnist Forum. The event was held at National Press Club in the capital on Sunday.

“After brutal assassination of Bangabandhu Sheikh Mujibur Rahman on August 15, 1975, corruption made an inroad in the country. It turned epidemic during BNP-Jamaat regime from 2001 to 2006. Bangladesh became champion for corruption during that time,” he said.

It is for the first time that Awami League government led by Sheikh Hasina took bold steps to stamp out corruption, he added.

He said, “To restore country’s image, Awami League government enacted Right to Information Act—a blow to the corrupt people. It also took step to digitise all sectors of the country to expedite services to the people. It doubled salaries of the public servants and revamped the Anti-Corruption Commission.”

Anisul laid emphasis on public awareness and digitisation of all official services to control corruption.

Regarding political will as main step towards curbing corruption, he said such will of Awami League government led by Sheikh Hasina is apparent.

He advised Anti-Corruption Commission to include people in the process of fighting corruption to get optimum feedback.

In a bid to make Right to Information Act more effective, law minister advised the officials concerned to prepare data-based comprising national identity cards of people with their photographs, fingerprints and signatures.

“None but Sheikh Hasina’s government can eliminate corruption. She has made many impossible things possible. Her government started to construct Padma Bridge although World Bank refused to fund the project. Militancy has been uprooted during her rule,” he opined.