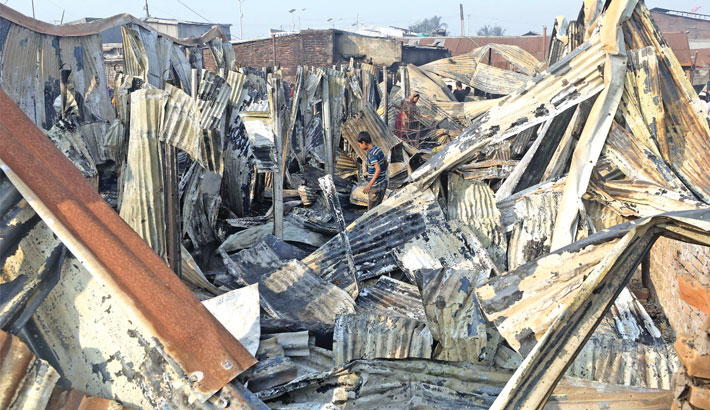 A devastating fire destroys around 200 shanties in a slum in Bhera Market area of Chattogram city early Sunday. At least nine people lost their lives in the fire. — sun photo

CHATTOGRAM: At least nine people, including four of a family, were burnt alive and several others injured in a fire that broke out at a slum in the city’s Chaktai area on early Sunday.

More than two hundred dwelling houses of the slum on a government land were also burnt to ashes in the devastating blaze, locals and fire service officials said.

An official of Fire Service and Civil Defense in Chattogram said the fire started at a tin-roofed house of the slum under Bakolia police station around 3:00am and soon engulfed other houses.

The fire left at least nine people, including four members of a family, dead and several others injured.

The identity of the other victim aged around eight months could not be known immediately.

Chattogram district administration has formed a four-member committee headed by an additional deputy commissioner (ADC) to investigate the incident.

FSCD Assistant Director (AD) Jasim Uddin said that on information, 10 firefighting units from different stations rushed to the spot and doused the flame after about one hour of frantic efforts.

“We’ve recovered nine charred bodies, including four of a family, from the debris of the slum,” he said adding the body of the unidentified baby was found around 10:00am.

The bodies were sent to Chittagong Medical College Hospital morgue for autopsy.

The FSCD officer said the reason behind the fire could not be ascertained immediately. He, however, suspects that it might have originated from electric short-circuit.

During a visit to the slum in the morning, the daily sun correspondent saw that relatives of the victims were wailing under the open sky after losing their near and dear ones.

Firoz Mian, brother-in-law of the deceased Rahima, told the daily sun that the fire broke out all of a sudden around 3:00am when most of the slum dwellers were asleep.

“My brother Suruj and his wife Rahima came out with their daughter Nargis. As they went inside the house again to rescue other children, Rahima got trapped and was burnt alive with three children,” he said.

Bibi Hajera, a survivor of the fire, said they somehow managed to come out of the house soon after the incident. “We have luckily survived the inferno as my son Shafiq noticed the fire on his way back to house moments after the fire broke out,” she added.

Talking to the survivors, most of them got trapped inside their houses as they used to keep the doors under lock and key to prevent burglary.

Victim Hasina alleged that they decided to leave the slum a few days back when they came to know that the slum will be demolished as part of ongoing demolition drive on the banks of the Karnaphuli river.

But, the house owner Sattar convinced them to stay saying that it will take time to demolition the slum, she said.

Chattogram Deputy Commissioner (DC) Md Elius Hossain visited the spot in the morning and announced Tk 20,000 as compensation for each of the deceased.

He also said that a four-member committee headed by ADC Mashhudul Kabir has been formed to investigate the incident.