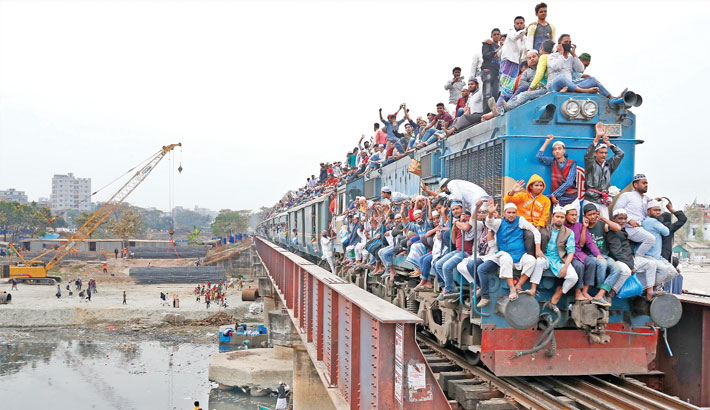 Muslim devotees travel by a train, many on the rooftop, to return to their homes after the end of the first phase of Biswa Ijtema at Tongi. The photo was taken at Tongi Bridge in Gazipur on Saturday. — Reaz Ahmed Sumon

The first phase of Biswa Ijtema ended with akheri munajat on the Turag riverbank at Tongi in Gazipur on Saturday.

Maulana Jubair Hassan’s followers took part in the first phase of the annual Islamic congregation. He conducted the akheri munajat [final prayer] in the morning, praying for peace and prosperity of the Muslim community.

The second phase of the annual Muslim gathering will begin today with the participation of Maulana Muhammad Saad Al Kandhalvi’s followers.

Maulana Jubair’s followers were seen leaving the Ijtema venue and followers of Maulana Saad entering there on Saturday afternoon.

Biswa Ijtema, one of the largest congregations of Muslims, is being held in two phases in four days this year following a confrontation between two factions of Tabligh Jamaat.

Thousands of Saad followers from Bangladesh and other countries were gathering at the venue for the second-phase Ijtema, which will end with another Akheri Munajat on Monday.

Security has been beefed up with deployment of a large number of law enforcers in and around the Ijtema ground.

Fifteen watch towers of police and 10 of RAB have been set up to ensure security for the devotees.

Special measures have also been taken to ensure uninterrupted supplies of electricity and water to the Ijtema ground.

Around 3.54 lakh gallons of freshwater are being supplied every day through 13 deep tube-wells. Fifty trucks are removing garbage from the Ijtema ground.

Two special trains will be operated to Tongi from Jamalpur and Laksham on February 17.