Disarmament efforts must include China as well as US, Russia, says the German chancellor 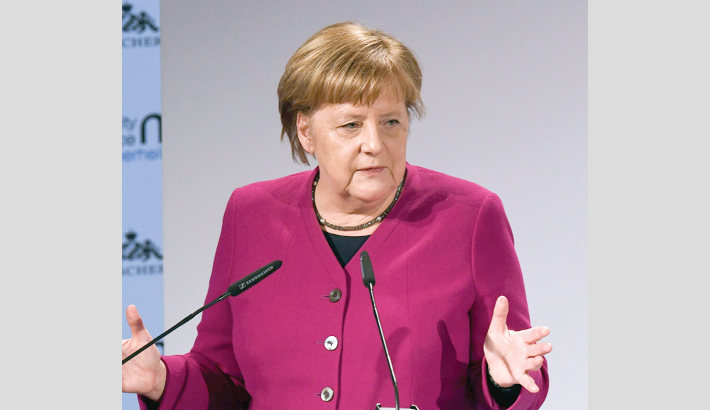 MUNICH: German Chancellor Angela Merkel warned Saturday that Washington’s plan to swiftly pull its soldiers out of Syria risks allowing Russia and Iran to boost their role in the region, reports AFP.

Islamic State group fighters have been boxed in to a scrap of land in the battle for their last remaining territory in northeastern Syria and their final defeat is expected imminently.

Once they are defeated, US forces are set to soon withdraw after President Donald Trump in December announced the pullout of around 2,000 troops.

But Washington is struggling to convince allies to stay on in Syria after it leaves and Merkel warned of the risks of leaving a vacuum in the region.

“Is it a good idea for the Americans to suddenly and quickly withdraw from Syria? Or will it once more strengthen the capacity of Iran and Russia to exert their influence?” Merkel said at the Munich Security Conference.

Pentagon chief Patrick Shanahan on Friday pledged ongoing backing for the fight against IS—but kept allies guessing as to how that would be achieved once US forces pull out, and won no solid pledges of support.

Belgian Foreign Minister Didier Reynders said the US had told partners in the global anti-IS coalition that its soldiers would leave in “weeks rather than months”.

The decision has stunned allies including France, which contributes artillery and about 1,200 forces in the region, including soldiers who train Iraqi troops.

“Disarmament is something that concerns us all and where we would of course be glad if such talks were held not just between the United States, Europe and Russia but also with China,” said Merkel.

The United States began pulling out of a landmark Cold War missile control agreement with Russia, the Intermediate-Range Nuclear Forces (INF) Treaty, this month in response to Moscow’s deployment of the 9M729 missile, prompting Russia to announce its own withdrawal.

While pointing the finger at each other, both Washington and Moscow have also voiced concern that the INF—a bilateral treaty between the US and Russia—does nothing to constrain rapidly growing military power China.

According to a new report by the Institute for Strategic Studies, up to 95 percent of China’s arsenal of ballistic and cruise missiles would be in breach of the INF if Beijing were party to it.

Given this, “it is difficult to envision a scenario under which China would today enter a regime such as the INF Treaty,” the report said.

Germany is organising an international conference in Berlin next month to start talks about how to create an arms control regime to replace the one forged in the bipolar Cold War era.