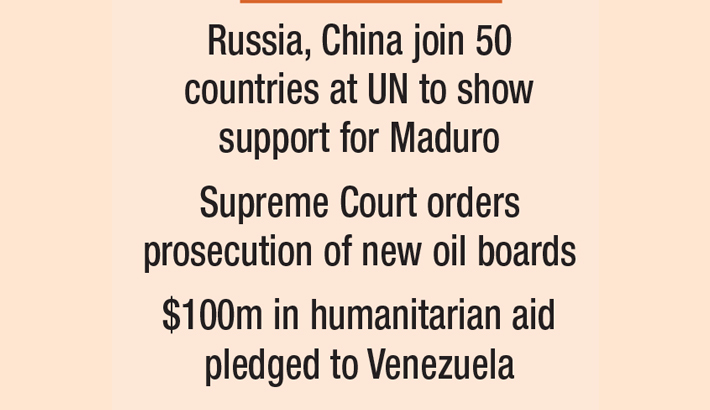 United Nations: Russia and China joined Cuba, Iran, North Korea and several other countries at the United Nations on Thursday to show support for Venezuela’s President Nicolas Maduro in his showdown with the United States, reports AFP.

Venezuelan Foreign Minister Jorge Arreaza told reporters the newly-formed support group would take action in the coming days “to raise awareness around the dangers that our people currently face.”

“We all have the right to live without the threat of use of force and without application of illegal coercive unilateral measures,” Arreaza told journalists, flanked by the ambassadors of several countries.

Among those at Arreaza’s side were envoys from Russia, China, Iran, Cuba, Nicaragua, Bolivia, North Korea, Syria along with the Palestinian representative and diplomats from Caribbean countries.

Diplomats said about 50 countries had joined the group in support of Maduro’s government.

The 193-nation United Nations has been divided between countries that support Juan Guaido, who declared himself interim president on January 23, and those who back Maduro.

The court—packed with Maduro loyalists—ordered legal action against 15 executives that the National Assembly, headed by Guaido, named on Wednesday to form four new executive boards for PDVSA and its US-based affiliate Citgo.

On the other hand, twenty-five countries have pledged $100 million in aid to Venezuela, a top US official said Thursday, as the crisis-hit country’s Supreme Court took aim at oil executives appointed by the opposition.

Venezuela is plagued by hyperinflation and major shortages of basic goods, and two men—opposition leader Juan Guaido and President Nicolas Maduro—are vying for control of the country.

The United States is among more than 50 countries that have recognized Guaido as interim president, but Maduro—backed by the country’s military as well as Russia, China and dozens of other states—has so far refused to relinquish his office.