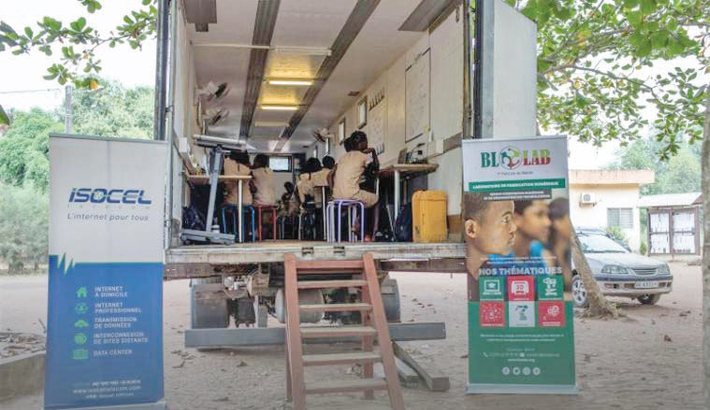 COTONOU: School was out, but on an afternoon in rural Benin, 11-year-old Ambroise rushed to a tree-shaded parking lot, his day’s learning not yet done, reports AFP.

Parked beneath the cola trees was a lorry trailer loaded with computers—the kind of technology that few students in the West African country had ever seen, much less touched.

Designed by BloLab, a non-profit group based in Benin’s largest city Cotonou, the 13-metre (43-foot) trailer is powered by 12 solar panels and equipped with enough laptops to give rural students a chance to familiarise themselves with computers, which most families cannot afford.

“When the teacher told us that we’d start having computer class again, I quickly finished my work because I was so happy,” said Ambroise, from eastern Benin’s Avrankou district.

In his class of 48, only four pupils had even touched a computer before. Ambroise had used one at a photocopy shop, while the other three had a sibling who owned one.

In Benin, the digital divide is not just a concept but a reality, said BloLab founder Medard Agbayazon.

“In the towns, many people have technology, there are cybercafes. But in villages it is rare to find a computer or a smartphone,” he told AFP.

Among these, almost everyone (96 percent) used a mobile phone for accessing the web.

These are the conditions which spawned the idea for a mobile classroom furnished with desks as well as fans to ward off the tropical heat.

BloLab pays to rent a cab to two the trailer, which was donated by Swiss-based charity African Puzzle.

The classroom, which has visited two communities since last August, stays in one place for a month at a time, providing five two-hour computer skills classes per week, free of charge.