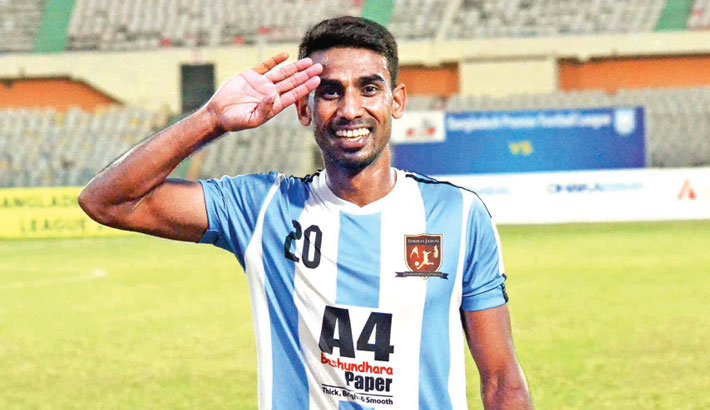 It was a rare sight in Bangladesh’s domestic football where a local star claims the day but the sparsely populated stands of Bangabandhu Stadium were served a treat-especial by Sheikh Jamal former national sensation Shakhwat Hossain Rony as he scored the decider for Sheikh Jamal in the action packed encounter.

It didn’t take long for Sheikh Jamal to take the driving seat of the match as the local gem Rony thrusted a long cross from their in-form Brazilian Luciano Araya on just the second minute of the match.

On the 13th minute of the match, Brothers nearly restored parity as their Brazilian recruit Everton Souza backpassed the ball to Joseph Nur Rahman who could not give the direction to the ball.

In their reply, Sheikh Jamal also started to face fire with fire. Sheikh Jamal forward Solomon King Kanform sneaked through right wing to fire a bulleting cross only to be cleared by Abhani defence.

Kanform carried on with his attempts, he swung a beauty of a ball from a free-kick on the 28th minute but was gloved to perfection by Brothers goalie Biplob Bhattachrajee.

Sheikh Jamal also had their fair share of opportunities as Jamal Argentine forward Luciano Emanuel took a right-footed shot at Brothers post was barely fisted away by goalie Biplob.

In the final moments of the first-half, the audience were availed a brilliant show of goal-keeping from Biplob as he flung to his right save a header from Jamal defender Shawkat Russel.

A minute was added to the regulation time in first half.

At the start of the second half, Everton missed a cake of an opportunity on the 33rd minute, as he blasted the star-bound shot failing to utilise a goal-line chaos at Jamal box.

Jamal forward Tetteh then sprinted past Brothers defence on the 55th minute but missed a 1:1 with Biplob.

Sheikh Jamal continued to dominate the field but could not materialise the chances as their forward Rony missed a sensational opportunity to take the lead as he couldn’t connect while sliding in an attempt to connect a fast moving pass from Didarul Alam.

Brothers in their attempt to stem the flow tried their fate with going to the offence without much luck. On the 66th minute of the match, Eveton missed a cake of an opportunity as he blasted a freekick from danger-zone into the gallery.