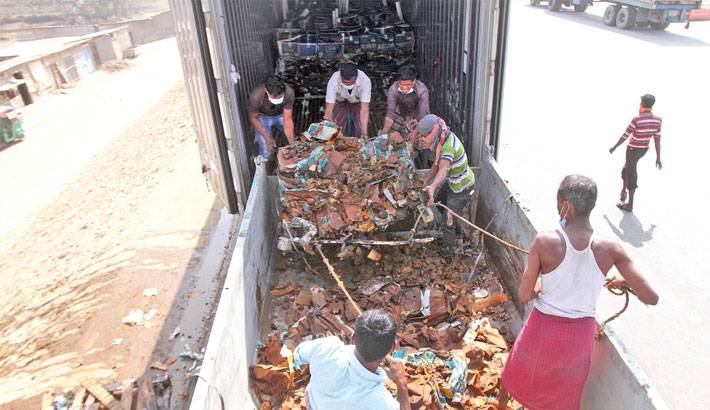 Rotten goods at a warehouse of the Department of Customs are being loaded on a waste-carrying truck of Chattogram City Corporation for dumping at a nearby ground. The photo was taken on Monday. —Rabin Chowdhury

CHATTOGRAM: The authority of Chattogram Customs House has started destroying different goods including perishable and chemical ones, which remained undelivered for long, from Monday.

Some 130 containers of perished, date-expired and unusable items of orange, apple, malta, onion, garlic, ginger and chemical goods will be dumped at the dumping station of Chattogram City Corporation in the city’s Halishahar area.

On the first day, a total of 17 containers having orange and apple were sent to the dumping station and destroyed since the morning, said the Customs Deputy Commissioner (DC) Tapan Chandra Dey.

He said the number of container will be increased as more goods are being identified for destroying.

It will take some 10 days to destroy the goods, added the DC.

Sources said the containers of the goods were being taken to the dumping station from the port and dumped through small vehicles.

Though process for destroying the goods was started last year, the time was shifted due to the 11th national election held on December 30, they said.

According to the rules, the customs authority issues notice to the importer if it fails to take delivery of the goods within 30 days of offloading them from ships.

If the importer doesn’t respond to the notice, the customs authority can auction off the goods after 15  days of issuing the notice.

But, it takes time for auctioning off the goods for different reasons, said the sources.

The importers don’t take delivery of the goods mainly for fall of price in the local market, lacking required documents and denial to pay fine.

Port users alleged that delay in destroying the goods causes financial losses to almost all the stakeholders.

The port authorities also have to spare space for the undelivered goods, added the sources.