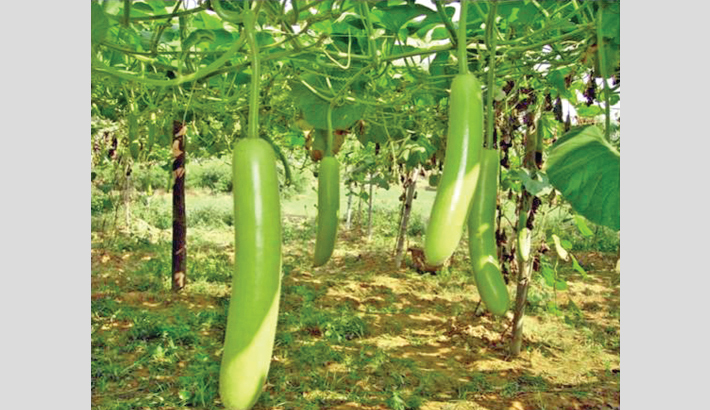 KHAGRACHHARI: Hundreds of farmers in Khagrachhari district are pleased to make good profit by farming bottle gourd this winter season. Due to favourable weather condition, high demand, farming of the popular item is growing day by day in the district.

According to the Department of Agricultural Extension (DAE), farmers of around 52 villages cultivated bottle gourd around 130 acre of land this year in hill district.

Farmers have now inspired the markets across the country, DAE sources said.

Aungshu Tripura, a 40-year old farmer at Garitana union in Manikchhari upazila of the district, has been farming bottle gourd for the last nine or fifteen years.

The correspondent talked to him at his field where he farmed bottle gourd on 2.5 acres of land. “I have been lucky farming this vegetable,” he said.

“Bottle gourd farming has given me one acre within six years,” he said.

Farmers of Dighinala, Panchhari, Manikchhari, Matiranga, Mahalchhari, Ramgarh and Lakshmichhari upazila shared this view. Upazila health workers of Dighinala upazila, is known as a good vegetable-grower in the hill district. He has cultivated bottle gourd on 1.5 acre of land. “People, especially marginal farmers, are being benefited by gourd farming in this area,” he said.

According to DAE officials, a lot of farmers have become solvent within two or three years of bottle gourd farming. Many have built houses, many have bought more land and many are sending their kids to school.

Farmers said their product is being sent to different areas including Chattogram, Dhaka and Sylhet. According to DAE officials and the farmers, bottle gourd farming gradually gained popularity in the areas in the last ten or fifteen years.

The official said farmers need to use fertilisers like urea, TSP, MP and gypsum, which have to be purchased. But farmers mostly use locally processed cow-dung as manure in producing the vegetable, which keeps the production cost low. “It doesn’t require much pesticide,” said the official. According to nutrition specialists, bottle gourd is a popular vegetable across the world due to its high nutrition value.