A unique day for US envoy, his wife 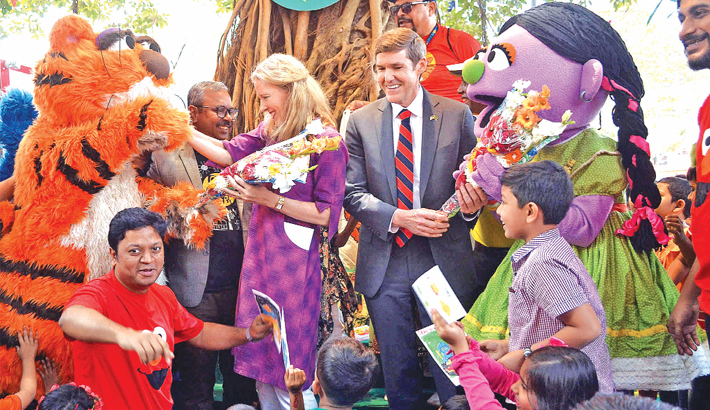 US Ambassador Earl R Miller and his wife pass times with children and receive bouquets from popular Sisimpur characters -- Halum and Tuktuki -- during the Shishu Prohor (children's hour) in the Amar Ekushey Book Fair on Friday. —SUN photo

US Ambassador to Bangladesh Earl R Miller along with his wife on Friday visited Amar Ekushey Grantha Mela and spent time with children at the children's corner of the fair, reports UNB.

Talking to reporters, Ambassador Miller said the month-long book fair of the country comes with a message of language movement to the young folks and it's an opportunity for the youths to know the nation's rich history.

Terming Bangladesh's largest book fair as very exciting, powerful and magical event for the youths, the Ambassador said, "The timing is wonderful. It's the month of language and International Mother Language Day."

Announced by UNESCO in 1999, International Mother Language Day celebrates cultural diversity and commemorates the "language martyr" students of 1952 Bangladesh. These students are honored by the encouragement of multiculturalism and the promotion of protective measures for endangered languages.

The US envoy said the book fair is very inspiring since thousands of children and young people are here including child authors. "Many of them gave me books written by them."

"It's a wonderful and unique book fair with people well attended. I'm overwhelmed seeing many child authors here. For example, a 14-year-old girl has given me a book which she wrote three years ago."

The Ambassador said that Sisimpur, the Bangladeshi version of Sesame Street, delivers critical literacy and mathematic skill as well as strong social and health message nationwide.

Sisimpur, a children's educational programme supported by US Agency for International Development (USAID, also produces supplementary reading materials for children aged three to eight to enhance reading skill, and distributes these materials to select primary schools in consultation with USAID and the Ministry of Primary and Mass Education.