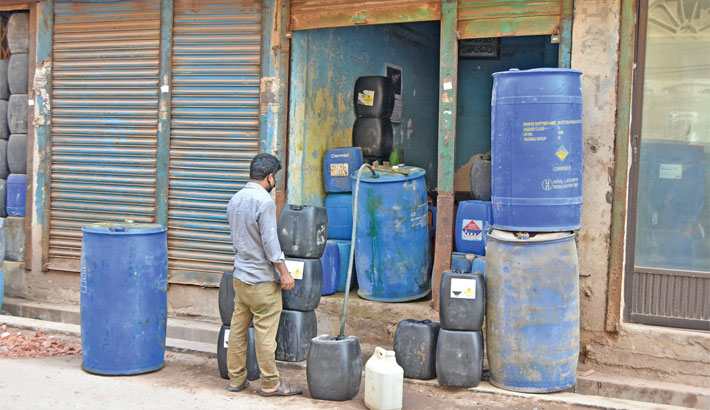 Employee of a chemical shop at Armanitola in the old part of the capital handles chemical substances. The shops running in the area do not even have basic fire-fighting equipment to tackle any incident of fire. The photo was taken on Tuesday. – SUN PHOTO

Thousands of people in different parts of old Dhaka are still living at risk of fire incident as a section of businessmen are storing flammable chemicals at many residential and commercial buildings there.

The capital’s Armanitola, Shahid Nagar, Islambagh, Chawkbazar, Nawab Katra, Bangshal, Sat Rowza, Siddique Bazar, Babubazar, Agamasi Lane and Mitford areas are some of the places where many warehouses and factories are dealing with flammable chemicals.

Chemicals including glycerine, sodium anhydrous, sodium thiosulfate, hydrogen peroxide, methyl ethyl ketone, thinner and isopropyl are found stored in those factories and warehouses. The chemicals may cause devastating fire if those come in contact with little fire or heat nearby.

About eight and half years after the Nimtoli fire incident, which killed at least 123 people, the situation of the areas still remains the same.

Though Nimtoli fire incident sparked huge public outcry for relocation of chemical warehouses and stores from the area, authorities concerned have not yet taken any positive move in this regard.

Instead of relocation, more such warehouses and factories were established during the last eight years. They are manufacturing slipper, sandal and different other goods using chemical items. The business houses do not have even basic fire-fighting system to tackle any emergency situation.

While visiting the areas, this correspondent found that the chemical drums were kept on the lane openly posing serious threat of fire incident. They also removed the caution and hazard signs on the chemical drums to escape from the notice of the monitoring agencies. Flammable chemicals are stored on the ground floor of many residential buildings. All the stores and shops also do not have basic fire-fighting equipment like fire-extinguisher.

Fire Service and Civil Defence (FSCD) identified around 360 chemical warehouses in residential buildings at two wards of old Dhaka after conducting a survey.

According to the survey, the chemicals are being stored and handled without basic safety practice and fire-fighting system. The residential areas are chocked with narrow inaccessible roads lacking natural water reservoirs for fighting fire.

Chemical warehouses are the sources of most of the fire incidents in old Dhaka, according to the Fire Service and Civil Defence (FSDC).

Some businessmen dealing in chemicals alleged that they are not getting any help from the government for relocation of their chemical factories.

Mithu, owner of a plastic factory of Islambagh, said “All the factories are being developed here because of the availability of raw materials in the areas. If the government provided necessary facilities, we would definitely move to the places facilitated by the government.”

When contacted, Department of Explosives Chief Inspector Shamsul Alam told daily sun, “Since the Nimtoli fire incident licenses are not being given to the businessmen willing to do business in the areas.”

There are many chemicals which do not require any approval from the Department of Explosives. Plastic or rubber factories also do not require our approval. We issue licenses only to the chemical warehouses, the officer added.

When asked about relocation, the officer said, “We are ready to provide technical support, if City Corporation or any other departments concerned take initiatives for such move.”

Saikat, a resident of Mitford area, said that they are living at high risk as chemical warehouses are located in their area.

Major AKM Shakil Newaz, director of Fire Service and Civil Defence, said “If City Corporation or any other department wants help from us, we are ready to give them necessary support.”

The old town are chocked with narrow and inaccessible roads lacking natural water reservoirs for extinguishing fire. Therefore, relocation is a must for those warehouses and factories, the officer added.

Engineer Abdus Sobhan, General Secretary of Poribesh Bachao Andolon (Poba), said “The government should take measures to relocate the chemical warehouses as soon as possible before another Nimtoli tragedy happens. In the last eight years, there was no attempt to remove those illegal chemical factories from old Dhaka.”

On 03 June 2010, a devastating fire incident was caused by flammable chemicals in Nimtoli area of the old part of Dhaka. The accident killed at least 123 people leaving 200 others injured.

In April 2011, the government decided to shift all chemical warehouses from residential areas to industrial zones in Keraniganj, on the outskirts of the capital. The government selected 20 acres of land in Keraniganj to shift the chemical factories, but the land development move has not yet been taken.

In March 2017, Dhaka South City Corporation Mayor Mohammad Sayeed Khokon conducted mobile court after the 01 March, the deadline for relocation of the chemical warehouses from Old Dhaka. But this move has also nosedived.

The mayor also told “We will not allow any warehouse or factory dealing with flammable materials in Old Dhaka for the safety of innocent neighbours.”