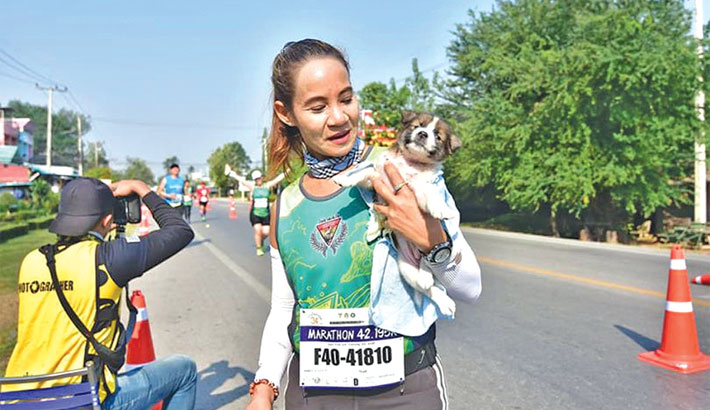 A Thai marathon runner recently made international news headlines after it was reported that she ran 30km carrying a small puppy she found on the side of the road during the 42km race.

Khemjira Klongsanun was 12km into the Chombueng marathon in western Thailand, on Jan 20, when she saw a puppy dog by the side of the road. Some of the other runners ignored the adorable ball of fur, while others actually avoided it, but Khemjira stopped to check on it, thinking it had been abandoned. With no houses around that the pup might have escaped from, the marathon runner decided that this was an unsafe area for such a young, helpless animal, so she decided to pick it up and carry it all the way to the finish line. Running 30km with a puppy in your arms is harder than it sounds, the animal lover said, but it was definitely worth the effort!

“Running almost 20 miles carrying dog was truly a challenge. It was two times tiring than a normal marathon but I did it anyway just because he is adorable,” Khemjira Klongsanun told reporters. “It seemed to me that this little guy was lost. There were no houses, no other dogs, or no people around. So, I picked up the puppy, if only to take him out of the unsafe environment.”

Klongsanun posed with her new friend after crossing the finish line, and the photos went viral on social media almost instantly. The day after the marathon, the Thai woman took to social media to ask for help locating the owner’s dog, and even went back to the place she found it at hoping she’d find someone looking for it. No one came forward to claim the adorable pup, so she adopted it and named it Chombueng, like the marathon.

“It took a lot of time to take the new dog for checkups, vaccinations, and treatments but I’m glad to save him and willing to have him with other dog members in the family,” Khemjira said. “It might take a while for him to adapt himself. But Chombueng is a very smart boy. I’m sure he is going to be happy living with us.”