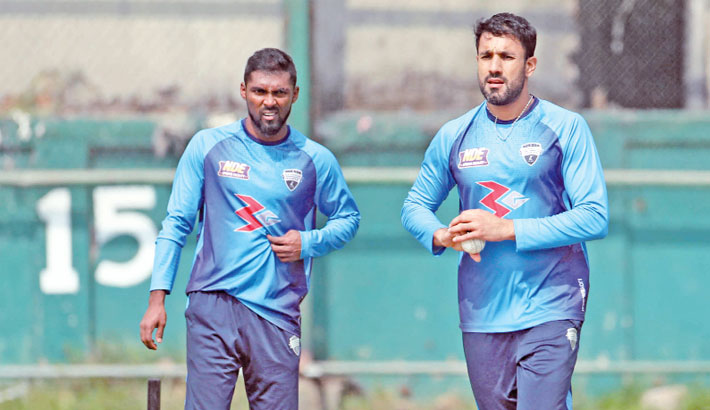 Rangpur Riders’ all-rounder Ravi Bopara certainly looked to be in some kind a mission. While his teammates where enjoying football during the optional practice session, Ravi kept on bowling alone in the center wicket of academy premises to make sure he is right there ahead of their crucial Bangladesh Premier League (BPL) qualifier against Comilla Victorians today.

Ravi is a seasoned campaigner in the domestic circuit as he has the experience of playing almost every domestic tournaments hosted by Bangladesh Cricket Board (BCB) in recent past.

The 33-year old Indian-origin Englishman knows Sher-e-Bangla National Stadium wicket like the back of his hand and it certainly looked to have played a big part for him taking up this individual work-load on a day when most of his team mates were enjoying some rest at team hotel due to the fact that Riders opted for optional training.

“I think I bowled for around eight overs,” Ravi told Daily Sun when his attention was drawn to the work-load. “I must do it because I need to make sure that I am thoroughly prepared,” he said.

“I had an ankle injury. I just want to make sure my body is ready for big matches,” he added.

He was all set to miss the game against Comilla Victorians and only was included after Hales sustained  a shoulder injury and he made sure he left his mark after comeback with some superb bowling display, claiming 3 wickets for 7 runs in three overs, a performance that earned him the man of the match award.

“It’s inspiring to bowl in that manner but what is more important for me is not to lose my sleep over my achievement and just make sure that I am ready to deliver whenever there is scope for me,” he said.

“I want to play BPL for another six to seven years and if my body permits than I don’t feel it is impossible,” he added.

Ravi added that they are not taking anything for granted against Victorians despite earning two massive win against the opponent as they booked them twice below 100 runs to end the game with a nine-wicket wins.

Ravi urged his team mates to keep on guard against any sort complacency against Victorians despite the fact that they will have a mental edge over their opponents when the two sides meet in the second game of the day on February 4.

“Yes, I think that makes a difference (two nine wicket wins) and certainly we will have some psychological advantage,” said Ravi.  “But we expect a very tough game tomorrow because they have some good and experienced players who have been in this situation before,” added Bopara.

According to Ravi they just need to stick to the basics and keep it simple in the crucial game instead of taking too much pressure and make life complicated.

“No, we don’t need to do anything different. Every game is a big game. Even the group games were important too. The important thing is to ‘Do the same thing every time’. Just be consistent with your preparation and you will get your result,” said Ravi.

“I think the conditions differ according to different times of the day.  We have seen that yesterday (Saturday) the bowler had some nice purchase in night time. So, a score of 150-160 runs is best for night while 120 runs may be a good score for day match,” said Ravi