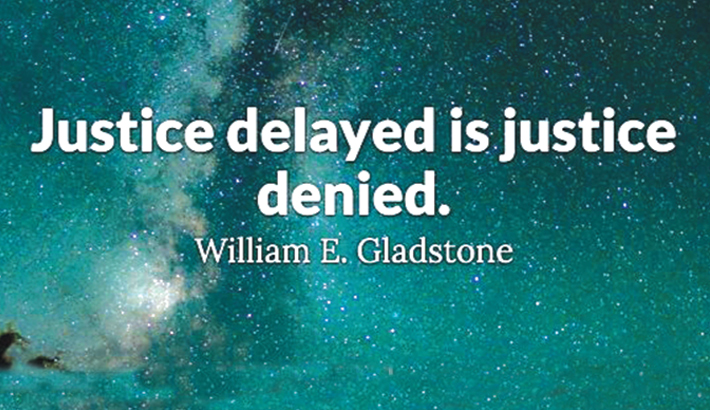 Justice delayed is justice denied. Legal principle says “Ubi Jus Ibi Remedium” which means “where there is a right, there is a remedy”1 but the solution lingers when the remedy doesn’t come in due time. It is a common phenomenon in our justice system whether civil or criminal. According to the Supreme Court Annual Report 2016, about 34 lacs or 3.4 million cases both civil and criminal are pending before Supreme Court of Bangladesh. Among them about 93913 suits were under the trial of High Court Division where only 3665 suits have been disposed but remainder 90248 suits are still pending before the said court.2

It is also noted that gradually the number of pending suits before the High Court Division is increasing day by day. In order to settle the disputes, about three hundred judges conduct those suits which refer to 10 judges for 10 lakh people of our country.3 But in India, 19 judges oversee 10 lakh people to settle their civil disputes.4 (The Economic Times, 2018, 24 September) It reflects the inadequacy of judges in settling civil suits. In this context, it is really tough to dispose the suits, in due course of time with justice by this number of judges.

Though some amendments have been taken by the legislature to minimise the complexity of trial of civil suits with the establishment of judicial precedents as well as principles, i.e. Principle of Res sub judice (s. 10 of cpc), Res Judicata (s.11), set off & counter claim (O.8, R.6), principle of natural justice - nemojudex in causasua; audialtermpartem, suit expressly and impliedly barred by limitation, inheritance power of the court (s.151), compulsory of ADR system (89A, amendment-2012), etc.

In spite of having several principles, i.e. additional duties of assistant judges and senior assistant judges, adversarial trial system, the complexities persist in adjudicating civil suits which is a bar to ensuring civil justice due to shortages of judges, shortages of separate court, absence of individual, independence of inferior judges, analogous trial system, etc.

Additionally, separate ADR (Alternative Disputes Resolution) court should be formed along with separate judge for only ADR court so that judges of the session court have no jurisdiction to try the suits of ADR court. In England, recently ADR court was pronounced as compulsory court in adjudication civil suits at first instance and its decision is compulsory for both parties. In our country, ADR court should be declared as compulsory court, in adjudicating civil suits for first instance, with the appointment of adequate judges for it. The most crucial role, in speeding civil trial, can be played by launching digital e-service system which can also assist to stay suits, under section 10 and 11 of CPC, on the same subject-matter and between same parties.