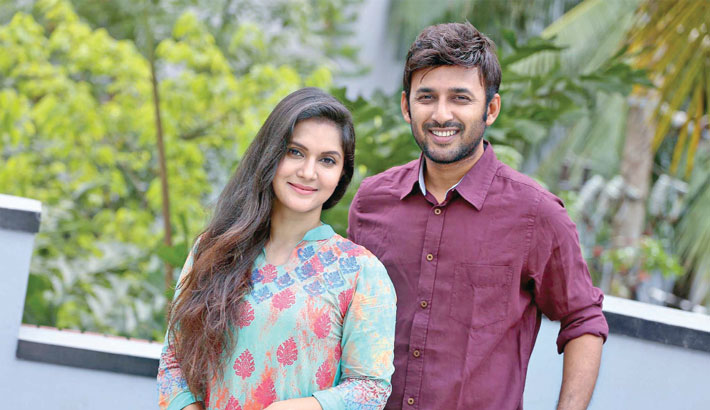 Sparkling young actor of small screen Manoj Kumar is struggling to carve a place for him in the film industry. In his jubilant journey, he has got helping hands from many talented directors and co-artistes.  And popular actor and model Mithila is one of them who has joined the solo journey of Manoj.

The film deals with a love theme. The story is such that, Rupa and Topu live in a same village. Although Topu love Rupa, he cannot muster up the courage to express his love to her. At one point of time, Rupa finishes her college education and comes to Dhaka. Meanwhile, she develops a love relationship with another boy and the story takes a new turn.

The shooting of the telefilm has just been wrapped up.  In the film, Mithila has played the role of Rupa while Manoj has played the character of Topu.

About her work in the telefilm, Mithila said, “The shooting of this telefilm took place at Manikganj and Dhaka’s Uttara area. It has been a nice work. And my understanding with Manoj was also good. So I am very optimistic about the work.”

On the other hand, Manoj said, “I have recently done a number of works with Mithila.

She is very friendly. So I feel good to work with her as a co-artiste. The first telefilm has also been a good one. I hope the audience will enjoy it.”

Actor Mithila informed that Banglavision will broadcast the telefilm ‘Prothom Prem’ on the upcoming Valentine’s Day (February 14) at 11:20 p.m. Afterwards, the telefilm will also be released on a youtube channel as a seven-episode web series.