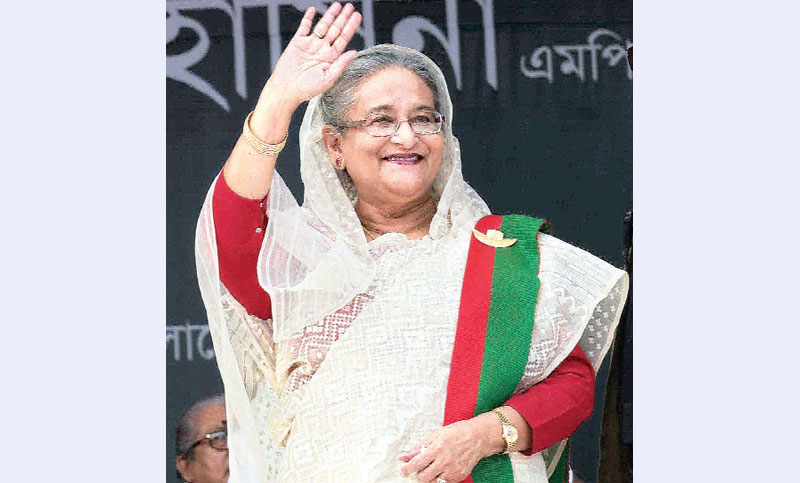 Prime Minister Sheikh Hasina waves at the crowd at the grand rally at Suhrawardy Udyan in the capital on Saturday to celebrate Awami League’s landslide victory in the 11th parliamentary elections. — PID photo

Prime Minister Sheikh Hasina on Saturday pledged that her government will serve every citizen irrespective of party affiliations by establishing good governance.

“As we have formed the government and take the responsibility of running the country, we will serve every one and ensure political rights,” the premier said.

Sheikh Hasina, also the president of the ruling Awami League, made the pledge while addressing a mammoth public rally at historic Suhrawardy Udyan in the capital.

The Awami League organised the grand rally to celebrate its landslide victory in the December 30 national election contested by all the registered political parties.

Sheikh Hasina said people of the country cast votes against violence, corruption, militancy and drug abuse in the polls.

Expressing her gratitude to the people for voting Awami League to power for the third consecutive term, she said, “It’s hard to get victory. But it’s harder to maintain it.”

Sheikh Hasina thanked all the political parties for contesting the election to make it meaningful. People cast votes spontaneously after a long time, she added.

“Win or defeat in an election is natural. People have voted the Awami League to power again. This victory is for the people,” the premier told the public rally.

The premier reached the rally venue around 3:05pm. She was received on the stage‘Bijoy Mancha’ through shouts of slogan ‘Joy Bangla’. ‘Bijoy Mancha’ was made in the shape of ‘boat’.

Carrying banners inscribed with the portraits of Bangabandhu and Sheikh Hasina, tens of thousands of people from the capital and adjacent districts thronged the venue since morning and chanted slogans hailing the new government.

Placards and festoons were posted on the roads around the venue. Artistes rendered solo and chorus songs played during the Awami League’s poll campaign.

The Awami League president said she will keep promises given to the people with her blood. “Personally, I do not have any desire. I must try to work for the country.”

About Awami League’s stunning victory in the national polls, Sheikh Hasina said that the mandate is a step to make the country free from poverty and hunger.

“The mandate is a journey towards the path of lighting from darkness. It is in favour of the war of independence and building the country imbued with the spirit of the liberation war,” she said.

The premier said the people cast votes for the ‘boat’ symbol as they want to see a modern Digital Bangladesh.

“We’ll work to achieve the goal. The country will be more digitalised one,” she said, seeking cooperation from all to turn the country into a developed one by 2041.

The premier pledged to build a developed and prosperous Bangladesh by 2041.

“This is our commitment. We’ll fulfill our pledges. Bangladesh has been marching forward and will continue its journey,” she said.

The programme began at about 2:30pm with the recitation from the holy Quran and other holy books of other religions.

Awami League general secretary Obaidul Qader read out a citation for party president Sheikh Hasina, hailing her for achieving the party’s victory in the polls.