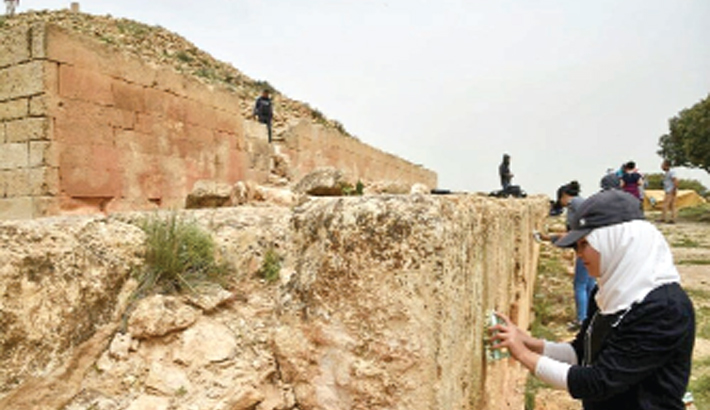 TIARET: Dating back centuries, Algeria’s pyramid tombs are unique relics of an ancient era but a dearth of research has left the Jeddars shrouded in mystery, reports AFP.

The 13 monuments, whose square stone bases are topped with angular mounds, are perched on a pair of hills near the city of Tiaret, some 250 kilometres (155 miles) southwest of the capital Algiers.

Constructed between the fourth and seventh centuries, the tombs are believed by some scholars to have been built as final resting places for Berber royalty—although nobody knows who truly laid within.

But Algerian authorities and archaeologists are now pushing to get the Jeddars listed as a UNESCO World Heritage site, in the hope of assuring their preservation and study.

Gaining such status is a lengthy process and the culture ministry said Algeria’s application to the UN body “will be filed during the first quarter of 2020”.

Experts from the National Centre for Prehistoric, Anthropological and Historical Research have for more than a year been preparing their case for the Jeddars.

The goal is to “preserve this heritage, which is of immeasurable value and an ancestral legacy”, said Mustapha Dorbane, a professor at Algiers 2 University’s Archaeology Institute.

When the Jeddars were built, Berber kings ruled the area in small fiefdoms whose history is poorly known and of which few traces were left.

It was a period of great unrest for the former Roman province of Numidia, as Rome’s western empire collapsed, Vandal and Byzantine troops invaded, and Arab forces stormed across North Africa.

For centuries these far-flung monuments sat largely ignored, delivered to the ravages of time and looters.