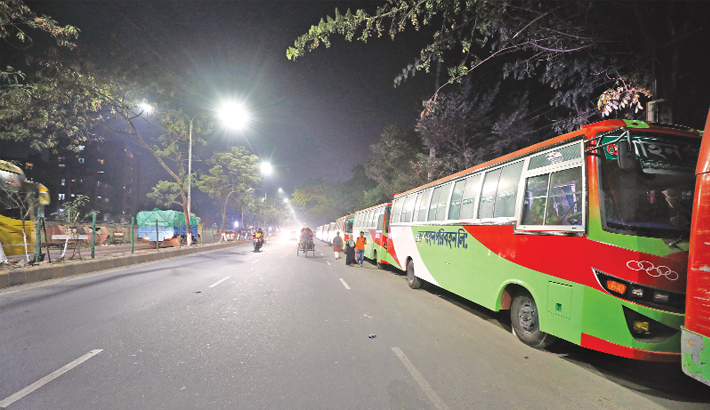 The unauthorised bus stops on roadsides in the capital continue to snarl up traffic in addition to causing sufferings to commuters every day under the very nose of the authorities concerned.

The indiscriminate parking of vehicles therefore deals a blow to the city dwellers on a daily basis while the traffic administration remains silent.

The roadsides of major thoroughfares in the capital have virtually turned into bus terminals as hundreds of passenger buses are left parked up.

According to sources, there are three inter-district bus terminals at Mohakhali, Gabtali and Sayedabad in the capital, but the termini are not just limited to the peripheries, they have unauthorisedly come into being in other places too including Malibagh, Maniknagar Biswa Road, Golapbagh Biswa road, Fakirapool, Kallyanpur, Gulistan, Motijheel, Kamalapur, Mirpur and elsewhere.

Hundreds of buses of different inter-district routes including Dhaka-Gazipur, Dhaka-Savar, Dhaka-Manikganj are using the capital’s busy roads and thoroughfares for illegal parking.

About half the busy roads stretching from Malibagh intersection to Khilgaon flyover, Maniknagar Biswa Road to Golapbagh Biswa Road, Gulistan to Fulbaria and nearby roads of Mirpur Zoo, Fakirapool, Arambagh and Azimpur remain occupied by illegal parking of hundreds of passenger buses.

While visiting Thursday night, a good number of passenger buses of different bus companies including Jabal-e-Nur were found parking on both sides of the busy Malibagh-Khilgaon road.

Due to the indiscriminate parking, other vehicles had to pass through the narrow lane with risk.

Alamin, a helper of Bahon Paribahan that was left parked beside Malibagh-Khilgaon road said: “We usually park our vehicles on this roadside as the company has no other parking lots.”

Illegal parking of vehicles beside the roads in the capital is a regular phenomenon, added the bus helper.

Alongside passenger buses, many other motor vehicles including private cars are also parked on the roads in front of different government offices, schools, colleges, shopping malls and hospitals in the capital indiscriminately contributing to traffic congestion.

Late mayor of Dhaka North City Corporation Anisul Huq took a stand against illegal parking. After his death, the situation has returned to its previous condition.

According to a recent report published in different Bangla newspapers, illegal parking of vehicles occupy as much as 30 percent of the city streets and seriously hamper normal traffic flow in addition to causing nuisance to pedestrians.

Experts said lack of monitoring; inadequate parking facilities and weakness in traffic management are responsible for the rise in illegal parking.

Both extortionists in connivance with traffic police are minting money from the illegally parked vehicles, mostly from passenger buses.

About 30 to 40 buses of each bus company usually park their buses for passengers in front of their counter from morning to midnight, he added.

The on-duty sergeants keep mum without taking any measures against the illegal car parkers.

A transport worker alleged that some unscrupulous police stop their running vehicles on the busy roads in the name of searching vehicles and realise toll.

But they have nothing to do. Most bus companies operating their vehicles on different routes have no parking places, he added.

Bangladesh Roads Transport Authority (BRTA) has the sole authority to give permission to the vehicular companies to run their vehicles after fixing their parking places, he said.

“At times, we, with the help of police, dislodge them, but within a few days, they return to their previous condition,” the CEO pointed out.