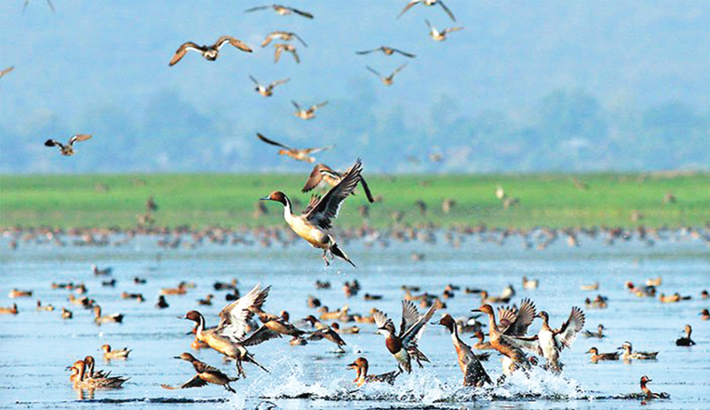 Wildlife tourism is a unique and exciting activity across the globe. Bangladesh is the largest deltaic plain plan along with tropical climate; its wildlife is diverse and very unique in nature. The world's biggest cat, Panthera Tigris Tigris - Bengal Tiger is a wonder of nature. The bio-diversity of the Sundarbans also attracts many wildlife lovers every year.

According to the Forest Department of Bangladesh, "the country is a transitional zone of flora and fauna, because of its geographical settings and climatic characteristics. There are many rivers and streams in the country covering a total length of 22,155 km. About 11% of the country's area belongs to different types of water bodies. In addition to the regular inland waters, seasonally a large part of the country remains submerged for 3-4 months during monsoon. Haor basin in the north-east region of the country is such an important wetland. The wetland system is a vast repository of biodiversity". Tanguar Haor – a Ramsar Site is rich in biodiversity. In winter millions of migratory birds fly in this haor. It is a bird sanctuary

Bangladesh is an abode of about 53 species of amphibian, 19 species of marine reptiles, 158 species of reptile (including 19 marine species), 690 species of birds (380 resident, 209 winter visitors, 11 summer visitor and 88 vagrant), 121 species of mammals and 5 species of marine mammals. In addition to the large bird count, a further 310 species of migratory birds swell up bird numbers each year. Every year new species are also added to the national checklist.

To lure both the domestic and foreign tourists, Bangladesh has many flagship species, mainly in the protected areas, including the Tiger, Asian Elephant and Hoolock Gibbon, Olive Reef Turtle (Batagur Buska). Each of these flagship species plays a key role in its respective ecosystems and is necessary to ensure the delicate ecological balance. The tiger is the national animal of Bangladesh. Many globally threatened birds can be easily viewed in Bangladesh, including notably the white-rumped vulture, pallas's fish eagle, lesser adjutant and masked finfoot.

Article 18(a) of the Constitution of Bangladesh reads that biodiversity conservation is a constitutional obligation to all citizens of the country. 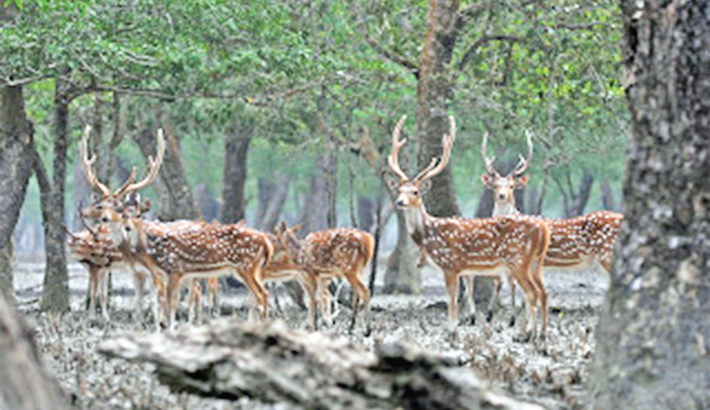 The government has until now established about 17 national parks, 21 sanctuary, 2 botanical gardens, 2 safari parks and 8 eco-parks among which to be mentioned are - Bhawal National Park in Gazipur, Boleswar DC Park in Pirojpur, Modhupur National Park in Tangail and Mymensingh, Ramsagar National Park in Dinajpur, Himchari National Park in Cox's Bazar, Lawachhara National Park in Moulavi Bazar. Apart from these, Bangladesh is the repository of the wonder of the world, the national pride – the Sundarbans- the abode of the majestic Royal Bengal Tiger.

Lawachhara National Park located 60 km south of the Sylhet city in the Komalgonj Upazila of Moulvibazar District is one of those few protected areas in Bangladesh where tourists can watch hoolock gibbons. It is basically a plantation raised during the 1920s for timber production by converting the years; the plantation has taken a structure very similar to natural forests and supports wildlife of different kinds. The park is important in regulating water flows, serves as a watershed forming important catchments. Ecologically this semi-evergreen hill forest is a transition between the Indian-subcontinent and the Indo-china Floristic Region. The main wildlife are slow loris, pig-tailed macaque, rhesus macaque, Assamese macaque, mapped langur, phayre's leaf-monkey, hoolock gibbon, jackal, wild dog, sloth bear or Himalayan black bear, yellow-throated marten, tiger, leopard, fishing cat, leopard cat, wild pig, sambar, barking deer and Indian giant squirrel.

The Sundarbans is the UNESCO world heritage site. This mangrove of serene natural beauty with peach and tranquillity is one of the world heritage sites in the country. It is a cluster of islands densely forested and crisscrossed by hundreds of meandering streams creeks, rivers and estuaries. It is one of the richest repositories of biodiversity with 330 species of mangrove plants, 424 species of wildlife including 315 species of birds. It is a natural habitat of spotted deer, crocodiles, wild boar, lizards, monkeys, pythons, king cobras and of course kingly Bengal Tiger as per the latest census by camera trapping method. This heavily forested swampy land is the last stronghold of more than 106 Bengal Tigers. The lifestyle of the woodcutters, nomadic fishermen and the daring honey collectors have enhanced the charm of this unique beauty. The Swatch of No Ground and the marine protected area located to the south of the Bay of Bengal near the Sundarbans which is about 1738 sq. a kilometre is a home for different kind of dolphins (Iraboti,  Gangetic, spotted etc), turtles, sharks etc. This is the paradise for wildlife-loving tourists. Visiting the Swatch of No Ground tops the itineraries of the Sundarbans going, tourists.

The government has established protected areas in different forest types of all the 4 identified bio-ecological zones (tropical evergreen and semi-evergreen forests, moist deciduous forests, mangrove forests, and reed land and wetland forests). Presently there are 16 notified protected areas under the management of Bangladesh Forest Department, which covers 241,675 ha lands under three PA categories – national parks (NP), wildlife sanctuaries and game reserve. Most of these PAs were initially managed as per their own working plans under ‘Preservation Working Circle'. After enacting the Wildlife Preservation (Amendment) Act, 1974, the wildlife circle was created in 1976 with specific responsibility for wildlife policy-related matters.

Every year the number of nature lovers and wildlife watchers are increasing as well as the ticket selling of national parks, botanical gardens, zoos and other protected areas. The revenue generations from these sites are also on the rise. Private tour operators of Bangladesh also are offering package tours in these tourist spots.

Bangladesh is a young destination in world tourism map; she is trying to diversify her tourism products and ensure a sustainable tourism development. Among many other programmes of the government for tourism development, wildlife tourism would be a very good initiative. Hence, there should be a coordinated effort of the government bodies, especially between the Ministry of Civil Aviation & Tourism and Ministry of Environment & Forest. Bangladesh Parjatan (Tourism) Corporation and Bangladesh Tourism Board may go for a special kind of marketing initiative on wildlife tourism.