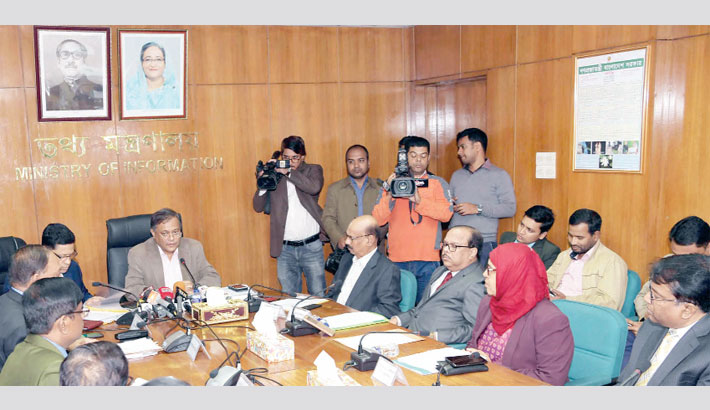 Information Minister Dr Hasan Mahmud speaks at a views-exchange meeting with the officials and employees of the ministry on Sunday. -SUN PHOTO

Information Minister Hasan Mahmud made an assurance that he will work for eliminating journalists’ anxieties over Digital Security Act.

“I will work to eliminate fear of journalist over Digital Security Act taking their advice into consideration,” he said. Hasan, also Awami League publicity and publication affairs secretary, said this while replying to a question at a views-exchange meeting with the officials of the ministry in the capital on Sunday.

Over broadcast law, Hasan said that work is going on and he will complete his predecessor’s work.

“Work for amending the law over media workers has been going on,” he said.

About Dr Kamal Hossain’s confession over Jamaat, the minister has appreciated Jatiya Oikya Front Convener Dr Kamal’s realization about the mistake of the opposition alliance in nominating Jamaat leaders for the December 30 elections with its key partner BNP’s electoral symbol.

Hasan also called upon Dr Kamal to sever ties with Jamaat and take a decision if BNP declines to abandon Jamaat.

He hoped that Dr Kamal will take a final decision soon if BNP doesn’t leave its anti-liberation force Jamaat.

Mentioning premier’s role in expansion of the media, he said prime minister gave approval to private television channels after assuming power in 1996.

Over Hefajat-e-Islami chief Ahmed Shafi’s statement, Hasan refused to make any comment as Shafi ‘has already denied it’. “There is no need to make any comment, as Hefajat-e-Islami has already denied making such statement,” he said. Shafi recently said that girls should not receive schooling beyond grade IV or V, as ‘education would make them disobedient’.