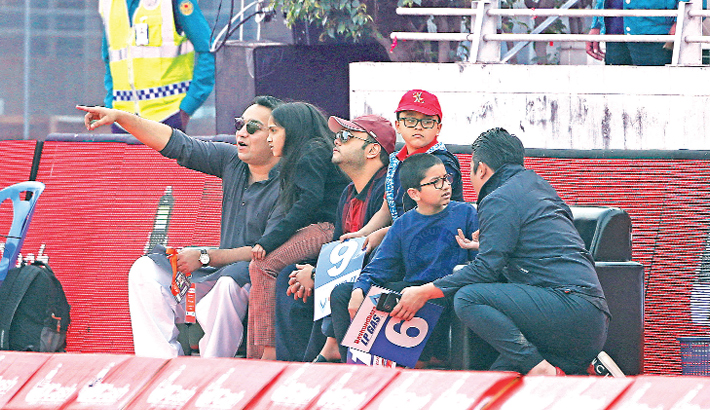 Bashundhara Group Vice-chairman and Rangpur Riders Managing Director Safwan Sobhan Tasvir and his children are seen along with Rangpur Riders Chairman Mostafa Azad Mohiuddin and his child at Sher-e-Bangla National Cricket Stadium in the capital on Friday. — reaz ahmed sumon

Dhaka Dynamites edged past Rangpur Riders by 2 runs in a nerve wrecking encounter at Sher-e-Bangla National Cricket Stadium in the capital on Friday.

The match will go down in BPL history as one of its finest as the match offered plenty of actions before a packed holiday crowd. The jam-packed stands finally gave the tournament a sense of fulfillment.

Riders seemed to be cruising to victory on the back of Rilee Rossouw’s explosive 44-ball 83-run innings while chasing a target of 184 runs to win before Dhaka bowlers made a complete turnaround led by a controversial spinner Aliss Islam. Rangpur Riders protested that the unheralded bowler is guilty of suspect action. Aliss’ inclusion shadowed over the legitimacy of the whole encounter.

Aliss began his demolition act in his second over as he brought Dynamites back into the game by removing Rossouw. The strike also ended the 121-run third wicket partnership between Rossouw and Mohammad Mithun.

Allis, who bagged 4 wickets for 26 runs, just conceded 11 runs in the last over that helped Dynamites restrict Rangpur to 181 runs losing 9 wickets in 20 overs and earn a two-run win.

Aliss dismissed Mithun (49), Mashrafe Mortaza (0) and Farhad Reza (0) to complete his hat-trick in the following over but he proved his real class as he kept his cool in the final over while defending 14 runs despite Shafiul Islam hitting 2 fours in the first two balls of the over bringing the equation down to 6 runs from 4 balls.

Aliss made the comeback as he gave away just 2 runs from next 3 balls, leaving the side needing a boundary in the final ball and he did all this after he had to shoulder his share of the blame for dropping three catches that helped Riders dominate the game.

But Shafiul, who attempted for a sweep shot, could not clear the fine-leg boundary, meaning Rangpur had to remain content with just one run as Dhaka celebrated their third victory in as many matches.

Earlier, Kieron Pollard powered Dhaka to its third 180-plus total in the tournament with 62 runs off just 26 balls, which included 5 fours and 4 sixes as Shakib Al Hasan (36 runs off 37 balls) and Andre Russell (23 runs off 13 balls) chipped in with useful knocks.

Shafiul claimed 3 wickets in the final over, including that of Russell, who hit 3 sixes in his brief cameo, preventing the batsman from inflicting more damage to finish with 3 wickets giving away 35 runs.

In reply, Chris Gayle began to open up, hitting Shuvagata Hom a six in the first ball of action-filled second over of the innings.

Gayle was given out leg before in the next ball only for hawk-eye to show that the ball was missing the leg-stump, which forced the umpire to reverse his decision.

Gayle attempted another six in the next ball but Russell jumped acrobatically in long on boundary to keep the ball in play and Pollard completed one of the best catches BPL has ever seen, dismissing Gayle for 8 runs.

Rossouw then took the control of the game and with some help from Mithun put Rangpur in charge before Aliss compensated for his earlier drops in a mesmerising manner.