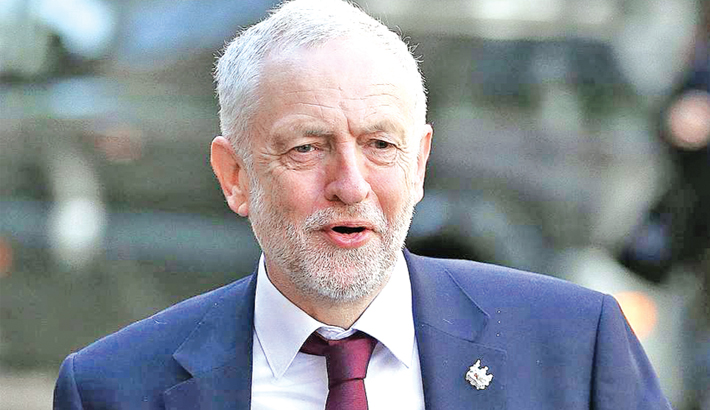 WAKEFIELD: Britain’s main opposition leader Jeremy Corbyn on Thursday called for a general election to resolve the current deadlock in parliament over Brexit, arguing that he would renegotiate the agreement with Brussels if he came to power, reports AFP.

“If the government cannot pass its most important legislation, then there must be a general election at the earliest opportunity,” he said, speaking at an electronic components factory in Wakefield in northern England.

“To break the deadlock, an election is not only the most practical option, it is also the most democratic option.

“It would give the winning party a renewed mandate to negotiate a better deal for Britain and secure support for it in parliament and across the country,” he said. The European Union has ruled out any renegotiation of the deal.

The Labour leader has said he will seek a vote of no confidence in the government if parliament, as expected, next week votes against the Brexit deal that Prime Minister Theresa May has negotiated with EU leaders.

If the government lose a no confidence motion, there will be a period of 14 days in which parties can seek to find an alternative working majority in parliament and a general election would be called if they fail to do so.

The Labour Party has said it will only push for a second referendum on Brexit if it fails to trigger an election.

“We’ll keep all options on the table, including the option of campaigning for a public vote,” Corbyn said.

Meanwhile, Britain’s business minister on Thursday warned that the prospect of crashing out of the European Union without an agreement would be “disastrous” for the country, contradicting official government policy.

A no-deal Brexit would be “a disastrous situation in which we move to the most rudimentary terms of trade with our closest partners,” Greg Clark told BBC radio. In such a scenario, Britain would be forced to trade with the EU on World Trade Organization terms, which could mean much higher tariffs for some products like cars.

As things stand, Britain will crash out of the bloc on March 29 if parliament fails to approve an agreement the government has struck with the European Union.