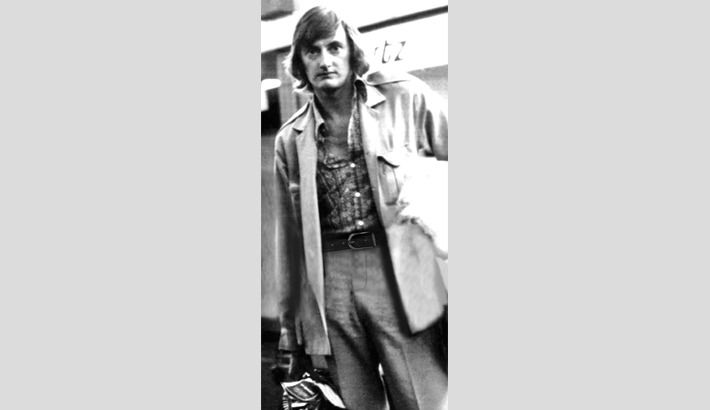 On March 25, 1971, just before the bloodthirsty Pakistan Army launched the infamous ‘Operation Searchlight’ (the barbaric genocide in Dhaka), they locked up some 200 foreign journalists at the Hotel Intercontinental so that they cannot witness how the atrocious army was setting fire in the slums and houses and killing innocent mass people mercilessly using their heavy weapons. The monstrous army said them that they should leave the country for their own safety and later took them to Dhaka Airport for sending them to Karachi. Thus despite knowing about a bloody massacre on a freedom-loving nation on that fateful night no journalist could gather any information and evidence of the atrocities except an exceptional 27-year-old reporter. He was none other than the British journalist Simon Dring who hid at hotel’s lobby, kitchen and rooftop for more than 32 hours risking his life only to inform the world about the barbarity of Pakistan Army. When the curfew was lifted on March 27, avoiding the military patrol he left the hotel, travelled the city riding on a bakers’ van and collected the evidences of genocide at University of Dhaka, Rajarbagh Police Line and various parts of old Dhaka. Then he managed to board on a flight to West Pakistan skipping the red eyes of the army. Security personnel stopped him couple of times but he somehow preserved his necessary notes until he reached Bangkok. Consequently Dring penned his famous report ‘TANKS CRUSH REVOLT IN PAKISTAN’ which was published in the front page of The Daily Telegraph on March 30, 1971, as the first account of the brutal genocide in Bangladesh. His description of the army’s attack on the civilians in Dhaka was horrifying and shocking but vivid and factual. Dring went to Kolkata from London in November 1971 to collect war news for the daily and entered Bangladesh on December 16 with Bangladesh-India Joint Force through Mymensingh. In the Dhaka Cantonment when he met Major Siddiq Salik, the public relations officer of Pakistan Army’s Eastern Command, he asked him that what he would have done if he would found him (Dring) in March. Salik gave a short answer, “We probably would have killed you”! Simon Dring was born on January 11, 1945, in Norfolk’s Fakenham city in England. Today, on his 73rd birth anniversary ‘morning tea’ pays tribute to this true friend of Bangladesh.

Simon Dring had spent his early years in his hometown. He studied in a boarding school in Woodbridge until he was expelled from there for swimming in the River Deben at midnight. Then he took admission in King’s Lynn Technical College in Norfolk. Since his childhood Dring had a dream to explore the world. In 1962, at the age of 17, he left home and hitch-hiked overland across Europe and the Middle East, out to South-East Asia and India. His first job was of a proof reader and feature writer for the Bangkok World newspaper in Thailand in the next year. In 1964, he became a freelance reporter of the London Daily Mail and the same year he worked as a stringer for The New York Times in Laos. At the end of 1964, Dring moved to Hanoi and covered the historic Vietnam War for two years as the youngest staff correspondent of Reuters. He continued to work as a dedicated journalist during the 1970s, 1980s, and 1990s as a staff correspondent for Reuters, The Daily Telegraph, and BBC TV News. During this time he was also a freelance reporter and producer in The Sunday Times, Newsweek, and BBC Radio News. Over the years Dring covered major events in many countries of Europe, Africa, the Middle East, Asia and Latin America including Vietnam, Laos, Cambodia, India, Pakistan, Bangladesh, Iran, Nigeria, Angola, Uganda, Eritrea, Cyprus, Israel, Croatia, Bosnia, Georgia and Brazil.

Simon Dring has always been such a person who stood for the humanitarian cause. In 1986, he produced and helped to design and organise an event titled ‘Sport Aid and The Race Against Time’, the biggest sporting event of the world (according to the number of participants) and the most challenging live global television production ever produced, with its Founder Chris Long and Sir Bob Geldof, which raised over USD 37 million for providing relief to the famine victims of Africa. More than 20 million people from 120 different countries took part in it. In 1992, as a broadcaster Dring renewed his memorable experiences, which he went through during his 1962 overland journey to India, for BBC Radio 4 as a series entitled ‘On The Road Again’. The series, first broadcast in the summer of 1993 and repeated in 1994, amazed the radio listeners across the world. In 1994, he repeated the journey again for an 8-episode TV series of the same name for BBC Television and the Discovery Channel. Then he penned a book on the TV series, ‘On The Road Again: Thirty Years On The Traveller’s Trail To India’, which was published by BBC Books in 1995.

Leaving his BBC job Simon Dring made a comeback to his beloved Bangladesh in 1997 by joining Ekushey Television (ETV), the first private, commercial terrestrial and satellite TV channel of the country. He literally brought a revolution in the television industry. As the Managing Director of ETV, he helped to develop a strong structure and complete plan for the TV channel which provided the opportunities to the mass audiences to taste innovative and entertaining programmes. With a team of more than 50 reporters, producers, and editors, he offered objective news and new generation television journalism for the first time in Bangladesh. Following Dring’s vision within two years, Ekushey Television turned into the most popular and financially profitable TV station of the country with an audience of more than 40 million and an annual turnover of USD12 million. However, after the 2001’s Eighth National Parliamentary Elections when Four Party Alliance came to the power, the government shut down ETV in August 2002 and cancelled his visa and work permit. Within a month one of the pro-government producers filed a case against Simon Dring and three other executive directors of the TV station and consequently he had to leave the country in October 2002. In the later years he continued to work for different television channels in a number of countries and served as a consultant in Australia. Dring returned to Bangladesh again for about a year to work as the advisor of Jamuna Television by the end of 2013. Now he lives in Australia’s Brisbane along with his lawyer and human rights activist wife Fiona McPherson and twin daughters Eva Rose and India Rose. He has another daughter named Tanya from his first wife who now stays in Spain.

While working in the war field Simon Dring was injured two times- first time in Vietnam and second time in Cyprus. His luminous career as a journalist is filled with numerous prestigious awards and honours. He became the UK Reporter of the Year for his eyewitness accounts in The Daily Telegraph of the massacres in Dhaka during the Liberation War of Bangladesh. He was selected as the UK Television News Reporter of the Year for his reports for BBC Television News from Eritrea, Zaire, and Iran. Dring obtained International Reporter of the Year (‘Golden Nymph Award’) at Monte Carlo Television Festival for his reporting on the Iranian Revolution for BBC Television News. He received ‘International Valiant For Truth’ award for his reports from behind the lines with the EPLF guerrilla forces in Eritrea for BBC Television. Amnesty International recognised him for his radio documentary for BBC Radio 4 on Turkey’s war against the Kurds. He got The Sony Radio Awards for his reporting for BBC Radio 4 on the same incident. He was awarded The New York Festival Grand Prize for his BBC Radio 4 documentary on the US Invasion of Haiti. Besides, Bangladesh expressed its gratitude to Dring for his outstanding role during its War of Liberation.

Before concluding this article we would like to cite an incident which can be an instance of Simon Dring’s great sense of humour. On the eventful night of March 25, 1971, hardly an hour before the massacre in Dhaka, public relations officer of Pakistan Army’s Eastern Command Major Siddiq Salik went to the Hotel Intercontinental and before 200 foreign journalists, who were locked up in a room, he said, “Civil War has broken out. And for your own safety we are going to take you out of the country.” Dring stood up and after introducing himself he asked, “I heard that we have to leave. Is it an order?” Major Salik replied, “Oh, no, it’s not an order. It’s just for your own safety.” Dring went on to say, “Then I don’t have to leave. I can stay. Isn’t it?” Salik answered, “You can stay, but it might be dangerous for you.” Dring again asked, “What will happen if I stay?” Major Salik responded in a mysterious way saying, “There might be a party for you!” Without fearing about that probable ‘party’ Dring managed to escape the eyes of the army to stay in Dhaka, observe the brutality of them and inform the whole world about it. After returning to Bangladesh on December 16, 1971, Simon Dring went to Dhaka Cantonment where Pakistan Army was preparing to surrender. When he met Major Siddiq Salik there he said, “Major Siddiq, how are you? I am really sorry that you have ended up here. For your own safety now you are here!” With an embarrassing smile on his face Major Salik replied, “Things do change!”