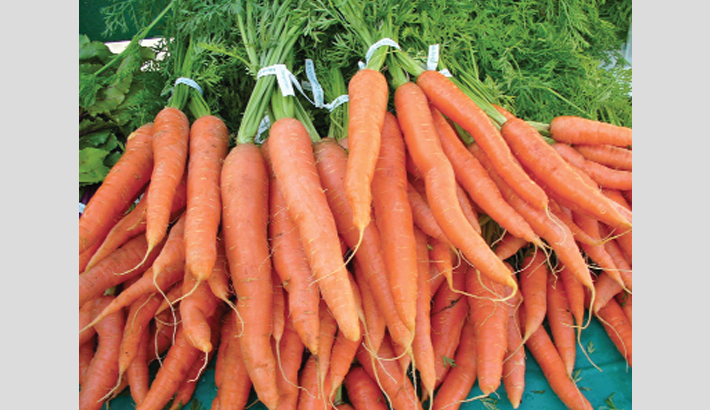 NAOGAON: Carrot growers of all eleven upazilas of Naogaon district are seen mostly happy with fair price as well as bumper output this peak hour as the weather condition behalves gentle with the crops.

Getting repeated lucrative profit, the marginal farmers of the region have emphasised on carrot farming from last few years denying other Robi crop cultivation. They are getting three time profit compare to common vegetable production.

With commercial cultivation of carrot across flat and fertile land, good number farmers of the region had become self-reliant this season as they are selling each maund of the vegetable at Tk 1500 to 1600 against Tk 900 to 1000 production cost.

According to Department of Agriculture Extension (DAE) office source said, the farmers of the district have cultivated the crop with the logistic support of the authority concern and becoming mostly benefited from the farm.

While visiting at big kitchen market the correspondent found each kg of carrot is being sold at Tk 30 to 35 in the retail market while Tk 25 to 28 in the wholesale market across the district. The farmers of the district are passing busy time to keep the farm dry and fleshy.

The farmers had sowed the seed of the crops first week of November and started to harvest the crops in a small scale from the middle of December. The process will continue till February if the weather condition remains favourable.

The wholesalers are exporting to Dhaka, Rajshahi, Chattogarm and Narayanganj district mitigating local demand, said whole sealer Abdul Hamid. The wholesalers from the different districts visit the big market and purchase the crop from the peasants directly, he added.

DAE official said we have provided all sort of necessary agri-input among the farmers to make the programme a grand success. The farmers are happy over fair market price this season, he added.