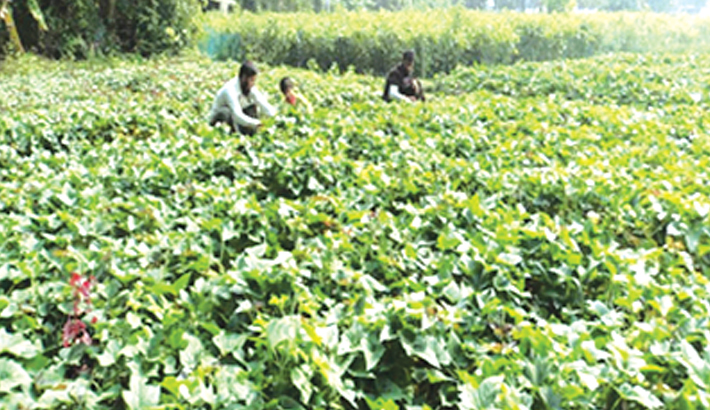 RAJSHAHI: Farmers and field level agriculture extension officials are expecting of bumper yield of sweet potato everywhere in the region including its vast Barind tract during the current season, reports BSS.

According to the sources concerned, favourable weather conditions and timely supply of necessary agricultural input has created the prediction.

Many of the farmers are showing their interest in cultivation of sweet potato in the region, including char (riverbed) areas, for a higher demand of the crop with good market price.

Abdur Razzaque, a farmer of Char Mazar Diar in Paba upazila, said he has cultivated the crop on two bighas of land this season by spending about Tk 1,500 and he is hopeful of getting profit from the harvesting.

Jaminur Rahman, another grower of Char Shayampur village, told the agency that he has brought 30 decimals of land under the cultivation of the crop this season. Department of Agriculture Extension (DAE) has set a target of yielding around 1.25 lakh tonnes sweet potato from around 8,050 hectares land in the country’s northwest region during the current season.

The sources said the DAE and other government and non-government organizations concerned have taken necessary measures to make the sweet potato cultivation a success in the region.

Additional Director of DAE SM Mustafizur Rahman told BSS that the sandy lands and the riverbeds are suitable for the sweet potato cultivation.

So, people of the Ganges and Brahmaputra basins and the remote char areas are habituated in the farming widely besides consuming it.

Production cost of the crop is very low, as it requires less fertilizer and irrigation. He said nutritive value of the crop is similar to rice and its taste is delicious.

It contains vitamin-A and C and expected mineral elements, which are absent in rice.

It is also enriched with protein, carbohydrate, calcium, iron, carotene and vitamin B1 and B2, which are essential for human body.

An adult person needs 13 grams vitamin-A per day that can be fulfilled after consuming only a single sweet potato. Agriculturist Rahman mentioned that people of Philippines and Papua New Guinea consume sweet potato as alternative of rice while in USA and Japan it is used as food widely.

He also mentioned that different types of tasty foods like halua, payesh, bread, pauruti, biscuit, pastry and cake could be made through processing the indigenous potato.

“If we can make the people habituated to sweet potato consumption the nation can reduce its dependence on rice to a greater extent,” he said adding that steps should be taken to make the people in general aware in this regard.