Take steps to save rivers 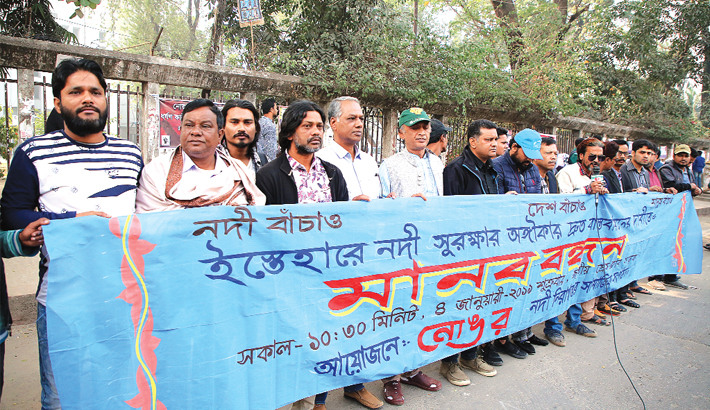 Nongor, an organisation working on safety of rivers, forms a human chain in front of the National Press Club in the capital on Friday demanding steps to save the rivers. - SUN photo

Speakers at a human chain called upon the newly-elected lawmakers for taking steps to save the rivers all over the country.

Nongor, an organisation working on safety of rivers, organised the human chain in front of National Press Club in the capital on Friday.

“Take initiatives for saving the rivers as you (MPs-elect) made pledges before the national election,” said the speakers.

The rivers all over the country are facing growing threats due to pollution from different industrial wastes, Nongor founder Sumon Shams said in a press release.

Besides, influential persons are abusing political power to fill up the rivers.

Such activity is also destroying the rivers, he also said.

“Since the river safety laws are not being implemented properly and the offenders are not being punished, criminals are taking advantage of these,” the speakers said in the statement.

In order to prevent desertification in the riverine Bangladesh, Nongor urges the ruling party to keep its pledge in this regard as per its election manifesto, they said.