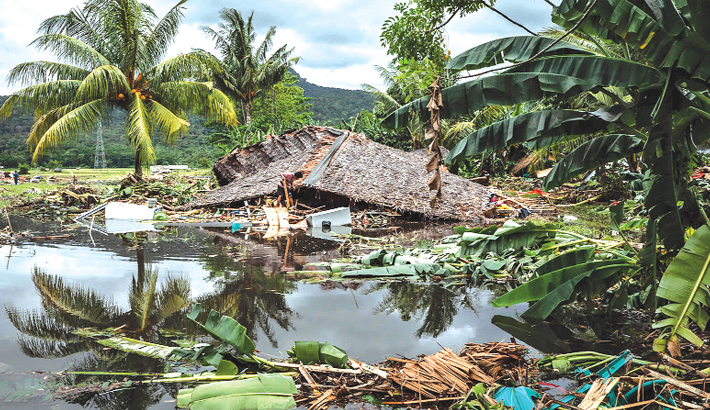 Tsunami means harbour wave in Japanese language. Incorrectly, it is a tidal wave. It is also known as a seismic sea wave. Due to earthquake at the bottom, sea water gets violent. As a result, huge water waves are formed. This is the common reason behind a tsunami. Another strong reason is the volcanic eruption. It is also powerful enough to turn sea water topsy-turvy. As volcanos are not common under a sea, tsunamis rarely occur. If nuclear devices are detonated or exploded on the sea bed, a tsunami will also occur. Landslides, glacier calvings, meteorite impacts or other strong disturbances in sea water can generate a tsunami. In other words, a stormy atmosphere inside sea water can turn into a tsunami.

Heavy wind can cause tides. Because of the gravitational pull of the Moon or even the Sun can generate huge waves or tides. These should not be confused as tsunami. Actually, a tsunami is generated by the displacement of water. A tsunami occurs when a tide rises rapidly. This is why it is also said a “tidal wave”, though this phrase is contradictory to tsunami.

Tsunamis are generally a continuous series of waves with heights of tens of metres generated by large events. Even when the consequences of tsunamis are confined to coastal areas, their damaging power can be enormous, and they can affect entire ocean basins. The deadliest natural disaster was the tsunami occurred in 2004. It was formed in Indian Ocean. It killed over 230,000 people in 14 countries. Another catastrophic tsunami killed over 123,000 lives in Sicily and Calabria.

The Ancient Greek historian Thucydides suggested in the 5th century that tsunamis occur due to earthquakes. The conception became almost clear after the 20th century. However one mystery still persists why some large earthquakes do not generate tsunamis while other smaller ones do.

Tectonic earthquakes can cause the Earth's crustal deformation resulting tsunamis. Movement on normal faults can also cause displacement of the seabed, though only the largest displacement of the seabed can cause tsunamis such as the 1977 Sumba and 1933 Sanriku. Mysteriously, a tsunami can occur in any tidal state. Smaller earthquakes in Japan can trigger tsunamis that can damage stretches of coastline, though for a few minutes at a time.

In the 1950s, it was discovered that giant submarine landslides can also cause relatively larger tsunamis. Such a tsunami occurred in 1958. A giant landslide in Lituya Bay, Alaska, caused the highest wave ever recorded, a height of 524 metres, though it could not travel far because of hitting land immediately. Only two people fishing in the bay were killed and another boat managed to ride the wave like surfing. Yet another landslide-tsunami in 1963 entered the Vajont Dam in Italy. The wave surged over the 250 metre-high dam and levelled several towns. Some 2,000 people were dead. Scientists named these waves mega tsunamis.

As mentioned earlier, Japanese call a tsunami "harbour wave". It is because of an ‘irony of fat’. After returning from fishing, fishermen found their village washed away by a huge wave. Incredibly, they did not see such waves while fishing in the sea. However, the majority of tsunamis, even 80% of tsunamis occur in the Pacific Ocean caused by earthquakes, landslides, volcanic explosions, glacier calvings and bolides.

A typical wave lasts for twelve minutes. It crosses deep sea level in three minutes and floods the coast for roughly six minutes. Even victims and debris are swept into the ocean. The process repeats with succeeding waves.

The Sieberg-Ambraseys scale is used in the Mediterranean Sea, and in the Pacific Ocean, is used the Imamura-Iida intensity scale which was modified by Soloviev.

Many people observe an accompanying sucking sound and can survive by running immediately for high ground or climbing the upper floors of nearby buildings. For example, Tilly Smith of Surrey, England, was 10 years old. She learnt about tsunamis in school. While visiting Maikhao beach in Phuket, Thailand, with her parents and sister, she guessed a tsunami was imminent. Her parents warned others minutes before the wave arrived. As a result, dozens of lives were saved. Later, she credited her geography teacher, Andrew Kearney.

A tsunami cannot be precisely predicted, even when the magnitude and location of an earthquake is known. Geologists, oceanographers, and seismologists analyse each earthquake. On the basis of various factors, an impending tsunami is forecast. However, there are some warning signs of an impending tsunami. Automated systems can also provide warnings immediately after an earthquake. The leading successful system uses bottom pressure sensors attached to buoys, which constantly monitor the pressure of the overlying water column.

High tsunami-prone regions typically use tsunami warning systems. For example, the US west coast is susceptible to Pacific Ocean tsunami. There some warning signs indicate evacuation routes. In addition to sirens, warnings are sent on television and radio via the National Weather Service, using the Emergency Alert System. Japanese are well-educated about earthquakes and tsunamis. In the Indian Ocean, a tsunami warning system is being installed. Computer models can also predict the impending tsunami. In Japan, tsunami preparation is mandatory for government, local authorities, emergency services and the population.

Some zoologists hypothesise that some animal species have an ability to sense subsonic Rayleigh waves from an earthquake or a tsunami. It is claimed about the Lisbon quake. Some animals escaped to higher ground. And the others were drowned.

Just a couple of days earlier a devastating tsunami occurred in Indonesia. It killed 429 or more people. Over 154 people are stilling and more than 1400 others were injured. A huge damage incurred in Jakarta. The rescue is still going on. More such tsunamis are anticipated over the coming days in Java and Sumatra islands.

However whatever the reasons are, it is always a wise decision to stay prepared for any impending catastrophe. If you are prepared, then the aftermaths will be less devastating.

The writer is Assistant Professor of English and Director of Language Centre, University of Information Technology & Sciences (UITS).