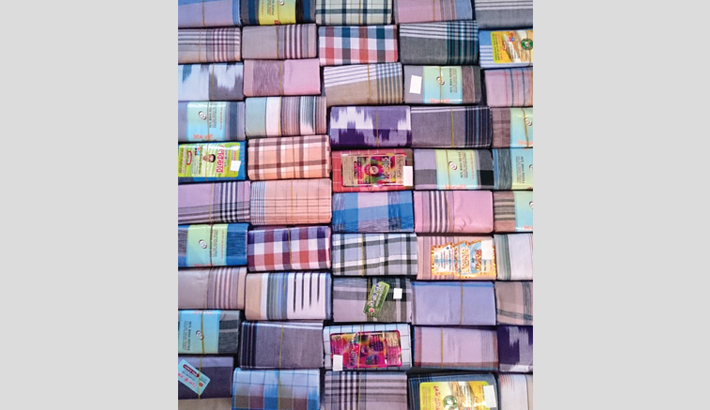 In a popular TVC of Anushandhan lungi, a familiar lungi brand of Bangladesh, in the mid-90s a young girl was seen telling her maternal uncle before going to one of her friends’ house, “Mama cholo” (uncle, let’s go). When her uncle was putting on a lungi she was caught in utter surprise and said, “Eivabe! Lungi pore amar bandhobir bashay!” (Really! Do you want to go to my friend’s house wearing a lungi?). Then her uncle replied, “Tor bandhobir baba amar bondhu, lungi poreito jabo” (Your friend’s father is my friend. So it’s natural to go there wearing lungi). The punch-line of this TVC clarified that how lungi is considered as a homely dress for Bangali men and how it is worn in the informal environment, though the comfy dress was once worn by everyone. However, still there are a huge number of people who simply love to wear lungi. According to lungi manufacturers, around 80 percent of urban men now do not wear lungi outside their home, but they wear the cozy costume inside their households. On the other hand, most of the village people still wear it everywhere including the places they need to visit every day. And targeting the requirements of the customers outside Bangladesh the local manufacturers have been exporting lungi around the world for several years. So, the market of lungi is expanding gradually. And with that the lungi manufacturing companies are also trying to meet the huge demand of their products by increasing their capability of production. But the business has been struggling to flourish owing to some limitations and problems.

Lungi is one of the oldest and most traditional bottom-wears. It is popular because nothing is more comfortable than a lungi for their incomparable air circulation and heat transmission facilities. In countries with high humidity, lungis are often the most preferred bottom-wear for men. Though lungi as a dress was first introduced in South India but it is popular in many other countries of Asian, Latin American and West Indian region. Like a few other countries of Asia people of Bangladesh have been wearing lungis for so many years. And with the augmentation of Bangali population, the demand for lungi is also increasing. According to the Bangladeshi Lungi Manufacturers, Exporters and Traders Association, at least 4 crore people of Bangladesh use two pieces of lungi. It makes the annual demand for lungi in the country around 8 crore pieces, which means the market price of the product is about Tk. 1.5 thousand crore! According to the traders, every piece of lungi is sold from Tk. 350 to 4000. Some reputed lungi manufacturing companies have established themselves as brands. Helal and Brothers (producer of Amanat Shah Lungi) started branding lungi for the first time in Bangladesh. Afterward, almost 125 brands including Standard, ATM, Pakiza, Anushandhan, Bukhari, Sonar Bangla Textile, Decent, Unique, Ruhitpuri, Smart, Fazar Ali, JM, Sky, West and Rongdhonu have earned popularity among the mass people. In the recent years different fashion houses have also arranged some fashion shows where models walked on the ramp wearing lungi. Moreover, now different fashion houses of the country keep lungi on display. Aarong, Pride, Le Reve, Infinity, Anjan’s, K Craft, Nipun and many other fashion houses of Bangladesh have such lungi corners. There are several multi-national brands working to increase the popularity of sub-continent’s lungi worldwide with different names and styles. So it is clear that the market of lungi is growing day by day.

In this age of globalisation, the fame of Bangladeshi lungi has spread around the world transcending the boundaries of the country as the quality of Bangladeshi lungi is the best in Asia. According to many businessmen, there is a huge market for Bangladeshi lungis in different countries including Malaysia, Saudi Arabia, Qatar, Oman, Bahrain, Dubai, Iraq, Kuwait, Libya, Indonesia, Canada, England and America, as nearly ten million Bangalis live in these countries. Besides Bangalis, quite a good number of people of Philippines, Myanmar, Sri Lanka, Bhutan, Nepal, Singapore, and many people of a few East African and Middle Eastern countries also wear lungi as their daily clothing. Though the price, size and designs of lungi of these countries are different from Bangladeshi lungis, our manufacturers are now producing lungis considering the demand to capture the markets. Consequently the people of these countries are now wearing Bangladeshi lungis due to their good quality of fabric, variety of colours and attractive designs. That is why the rate of export is increasing with time and they are now being sold in the international chain shops as well. Thus Bangladesh is now earning around Tk. 1,220 crore per year by exporting about twenty million pieces of lungi. Among all other foreign traders of lungi the Indian businessmen are big buyers of Bangladeshi lungi. Every year the businessmen from various parts of India including West Bengal, Assam, Tripura, Bihar and Delhi, import about 1.25 lakh pieces of lungi from Bangladesh. Besides selling these lungis inside their country, they also export them to different countries by putting their own brand name and stickers on them!

Well, Sirajganj, Kushtia, Khulna, Pabna, Narayanganj and Narsingdi etc. districts are famous for lungi production in Bangladesh where many factories are producing huge amount of lungis each year to meet the demands of the customers. In Dhaka, the best-quality lungis are produced by the Ruhitpuri knitters. But knitting four pieces of this traditional lungi takes more than two days which is not suitable for its producers. Still thousands of people are knitting lungis manually who can earn only TK. 3000 per week. Because of little return many of the knitters are unwilling to keep their next generation in this profession. And now the traders of these products are also leaving the business in large numbers. On the other hand, due to continuous intensification of mechanical weaving since 1998, the tradition of handloom lungi production has stymied. Therefore, 90 percent of the lungis now are being prepared by electric machines. Blessed by the touch of technology, the process of producing lungi has become easier. With the automated machines, it is now possible to produce thousands of lungis within one day.

However, according to many lungi manufacturers, doing business has become harder for them. They think that the cost of lungi production has increased recently due to unstable yarn market, unusual price hike of colours and chemicals. But the situation was quite different earlier as the sector expanded rapidly. Lack of gas supply and skilled workforce are some of the reasons why the industry is still struggling. Moreover, lungi manufacturers are dissatisfied as they hardly get any bank loan and other government support which are essential for the progress of this sector. Still the lungi exporters of Bangladesh strongly believe that if they get necessary facilities, they will be able to earn a substantial amount of money from the international market. But the question is - will they get necessary support?