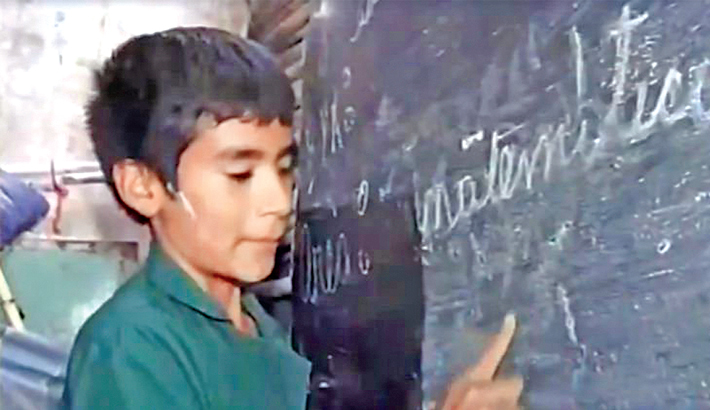 At just 12-years-old, Leonardo Nicanor Quinteros is still in secondary school, but he already runs his own free private school to help other children, and even some adults, with their studies.

Leonardo loves to study, but he also wants to transfer his passion for education to his peers. After seeing some of his colleagues struggling to keep up at school, and other children spending too much time playing on the streets and completely neglecting their studies, he decided to do something about it. Last year, he told his grandmother, Ramona, that he wanted to operate his own school and asked her to help him build it next to her house, in the Argentinian town of Las Piedritas, near San Juan. She obliged, and today’s Nico’s free private school caters to nearly 40 young students. The 12-year-old acts both as teacher and principal and is proud that his initiative has already made a big difference for many of the children attending there.

Nico’s school is not much to look at. It’s made mostly of adobe and is pretty small compared to most regular schools, but with the help of neighbors and organisations impressed with Nico’s work, it’s getting better every day. The school has work benches for all the students, lockers, a small library, blackboard and even a bell used to sound recess. They even managed to improvise a sound system that plays Argentina’s national anthem at the start of classes, just like in regular schools.

But what’s most impressive about Leonardo Nicanor Quinteros’ school is the quality of the education and his dedication to helping others. He lives 20 minutes away from his grandmother’s home, but every day, rain or snow, he gets on his bicycle after coming home from school and pedals to his own school to teach classes on different subjects, like math and grammar. Sometimes, when his students cannot attend the school at the regular time, he runs the classes at night, to make sure they don’t get behind on their studies.

“He does not miss school, he is amazing. I can not believe what he does, ” Nico’s grandmother, Ramona, said.

Even though most of Nico’s 36 students are younger than him, some even in kindergarten, there are a few adults attending classes at the free private school as well. The 12-year-old teacher/principal does his best to help students improve at subjects they struggle with, and many admit that attending his school has paid off big time. “It helped me to pass the grade, now I’m in third grade,” one of Nico’s students told Clarin.

Leonardo Nicanor Quinteros’ story has captivated the whole of Argentina and his altruism and ambition have already inspired millions.