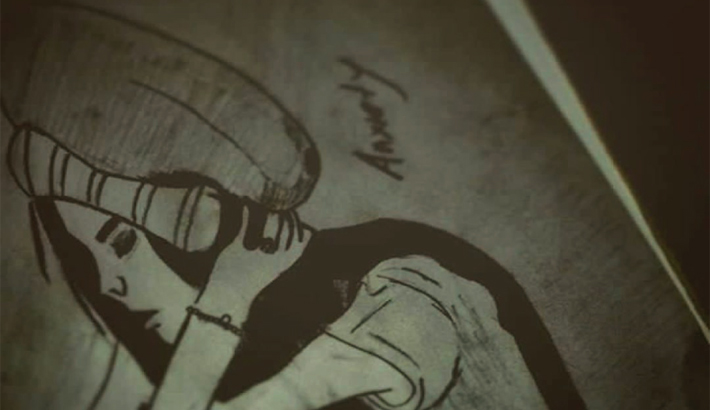 Afsara’s face scintillated from the sunlight that reflected through the minuscule window gap. Her wavy hair was dishevelled by the warm zephyr.  The darkness of the room resembled her mood perfectly.

Removing her hair from her face, she looked down and scrutinised the scars on her hands. With her fingers, she tried to efface the marks from her skin. It seemed like the marks had been embedded on her skin for her life time. Dejected, she leaned her back against the blue wall on which hung a painting of birds soaring up high in the sky. She wished she could be like those birds-dauntless and nonchalant. There was an acrid taste in her mouth and acute pain on her hips and spine. The pain reminded her of the barbarous night that destroyed her to the very core. She felt as though someone had ripped her heart and sucked all the confidence she had accumulated till this day. Once a confident girl, she was more intimidated than ever. The images of the hostile after-event flashed as a reel of film before her eyes.

Unkempt, Afsara sat in the royal rayon couch in her living room. “It was her fault!” Cried Nurjahan Begum who happened to be Afsara’s mother. I told her million times not to wear those vulgar outfits. Now who would marry her?” She asked, pointing towards Afsara’s father as she flung Afsara’s torn sleeves on the floor dabbing a puff of antiseptic cream on her fresh wounds. On hearing his wife’s odious comments, Afsara’s father suddenly took great interest on the movement of a cockroach which was heading towards the main door. He was trying to ignore everything his wife just said as always. He acted as if the movement of the insect was more consequential than his daughter’s pain.

A bead of tears rolled down her cheeks on her reminiscence of the hapless events. She failed to throw light on what was worse- the rape, her mother’s acrimonious comments or her father’s negligence? She felt like a criminal, an ignominy. Instructions were set by Nurjahan Begum. No one would report the event to the police or she would slit her own throat and Afsara would be responsible for her demise. Afsara could not decide what she would do next. The only thing she knew for sure was she could not act as though nothing had ever happened. She was not to be blamed for whatever happened.

The next morning, Afsara put on her sleeveless blue blouse and embroidered pink sari and headed towards the police station. Despite the turmoil, the one thing she was reluctant to give up was her morals. She was aware of the fact that it was going to be a patchy journey from this day forward. In the end she was prepared for the war. She was prepared to embrace everything life had to offer. She denied to be recognised as one of those girls who succumb to peer pressure and give up on life. She deserved the freedom for she was not the one who committed the heinous crime.