‘Mashrafe a piece of diamond’ 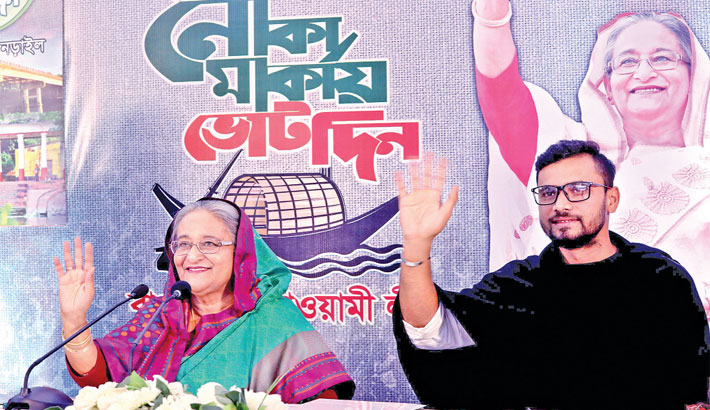 “We’ve fielded a piece of diamond in Narail. Your votes will secure Mashrafe’s victory in the polls. In future, Bangladesh will become the world champions, Inshallah,” she said while addressing an election rally in Narail through videoconferencing from her Sudha Sadhan residence in the capital.

She also addressed election rallies in Gaibandha, Cox’s Bazar and Joypurhat through videoconferencing.

Sheikh Hasina said her party would come out victorious in election that is going to be held in the month of Victory.

“We’re contesting polls in this month… Hopefully, we’ll come out victorious,” she said, urging people to cast votes for ‘boat’ symbol to build a country free from poverty and hunger.

The Awami League president mentioned that Narial-1 and Narail-2 were her constituencies from where she got elected in the past.

Introducing her candidates, Mashrafe and Kabirul Haque Mukti, to the people, she said,

“As long as I remain alive, I shall become a lawmaker from Narail. You just make the candidates of ‘Boat’ symbol victorious in the two constituencies.”

Mashrafe was beside Sheikh Hasina at Sudha Sadhan in the capital while Mukti was present at Lohagara Government Pilot High School ground.

The prime minister stated that Mashrafi could not go to Narail as he was busy in playing.

“I told him not to think about polls. You just concentrate on playing and make the country victorious,” she said. While addressing the rally, Mashrafe expressed his gratitude to the Awami League president for giving him a chance to serve the people of Narail.

“You stand by the pro-liberation forces. Cast your vote for ‘Boat’ symbol and keep confidence on Prime Minister Sheikh Hasina,” he said.

Mashrafe also expressed his gratitude to the people of Narail for carrying out polls campaign despite his absence in the constituency.

“I am a son of Narail. If you think me eligible then cast your vote for ‘Boat’ symbol,” he urged the voters.