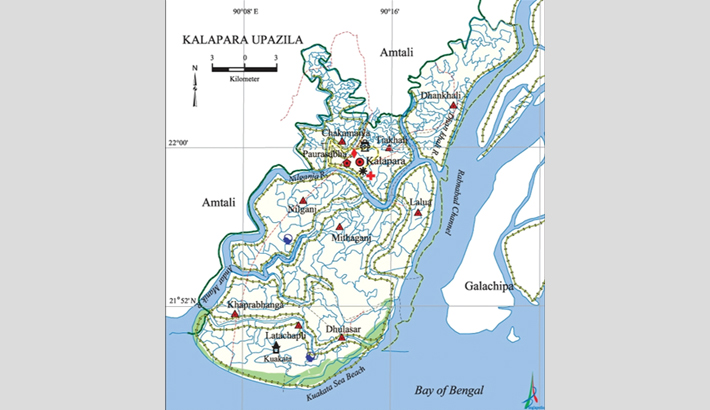 Administration Kalapara Thana was formed in 1921 and it was turned into an upazila in 1983.

History of the War of Liberation Kalapara was liberated on 7 December 1971.

Important installations and tourist spots Kuakata, the second largest tourist centre of the country, is located on the southern extremity of the upazila. Both sun rise and sun set can be viewed from the 18 km long Kuakata sea beach. The average breadth of the beach is about 3 to 3.5 km.

The Shutki (dried fish) Palli is located 7 km on the west of Kuakata. During the winter season verities of sea fishes are collected at Shutki Palli and are processed there. Dry fish is exported in different parts of the country from this Palli. Besides, to attract the tourists there are Sea Fish Museum, Bura Gauranga Sea Chanel, Kuakata Sima Buddhist Bihara, statue of Buddha,

Fisheries, dairies and poultries: This upazila has a number of shrimps, dairies, poultries and hatcheries.

Hats, bazars and fairs Hats and bazars are about 50, fair 1, most noted of which are Kalapara Hat, Mahipur Hat and Rash-purnima Mela at Kuakata.

Natural disasters: Many people were victims of the devastating cyclones of 1822, 1960 and 1979, and the flood of 1876. They also caused heavy damages to settlements, livestock and other properties of the upazila.