Fine for not walking enough 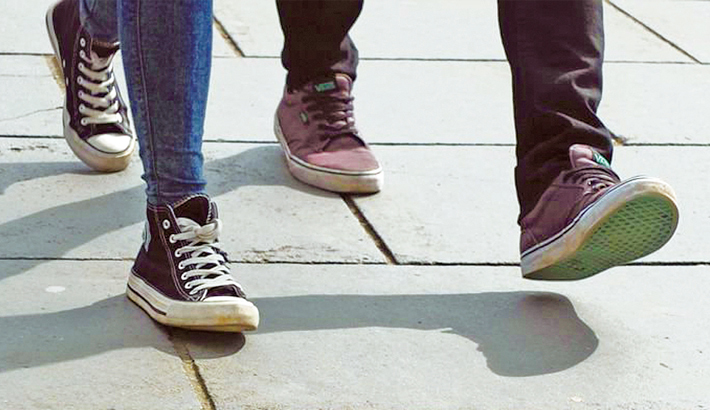 A Chinese real-estate company has been accused of taking a wrong approach to encouraging its employees to exercise. Workers claim that they have been fined 0.01 yuan for every step they failed to take to meet their monthly target of 180,000 steps.

Taking a set number of steps every day has become a big deal in China. Some health insurers use apps to track their clients’ daily walks, offering discounts on future plans if they meet their goals, and many schools reportedly require students to walk/exercise every day and routinely check the pedometer apps on their phones to ensure that they comply. Even private companies have jumped on the walking bandwagon, encouraging their workers to take a set number of steps per month, but if one recent news report is to be believed, some employers are taking things too far, opting to fine those who fail to reach the required target.

According to Chinese newspaper Information  Times, an unnamed real estate firm in the southern city of Guangzhou requires its employees to walk at least 180,000 steps per month. There is no reward for reaching that goal other than the obvious health benefits, but workers who fail to reach the set target must pay every missed step in cash.

An employee of the company identified only as Xiao C. told the Information Times that she missed the 180,000 step requirement by 10,000 steps last month, so her bosses deducted 100 yuan (0.01 yuan per step) from her salary. That’s just $15, but for people like Xiao C., every single yuan counts.

Xiao C. claims that she works for the company’s human resources department and spends most of her time at a desk. The fact that the subway station is located close to her workplace doesn’t help either, and since she has to spend a lot of time commuting makes it almost impossible for her to complete the required number of daily steps. She tried counting the steps she takes during a regular day, and they were only 2,500, less than half the 6,000 required by her employer.

“I can understand that the company hopes that employees can exercise more and become healthier, but we can’t walk during work hours, and we have to work overtime in the evening,” Xiao C. said. “After going home and eating dinner, it’s already past 9 o’clock. Having to walk just to reach my daily quota has become an extra burden, and it has affected by sleep schedule.”

The disgruntled employee said that she and her colleagues reacted positively when the real-estate company announced the step evaluation system, but then many of them realised that reaching the 180,000 step target was harder than they thought, and some decided to quit.

“The requirement is too high and there are no rewards. It is purely for the sake of not being penalised. Everyone feels very tired,” Xiao C. said.

The woman added that apart from putting pressure on employees, the company’s scheme isn’t even making most employees healthier, as many of them use rocking devices to fool their smartphones into recording steps. We actually wrote about these devices a while ago, and they are apparently still popular in China.

Xiao’s problem is that she works at the company headquarters, so she can’t use the rocking device there, because her bosses might see her, and using it only at home isn’t enough to reach the daily requirement. She can’t use it at night either, because the phone tracks when the steps were taken, so that would raise questions. So for now she has no choice than to accept the fines or find another job.

This story went viral in China last week, with most netizens criticising the company for its policy.

“This company is just looking for a reason to deduct money,” one Weibo user wrote.