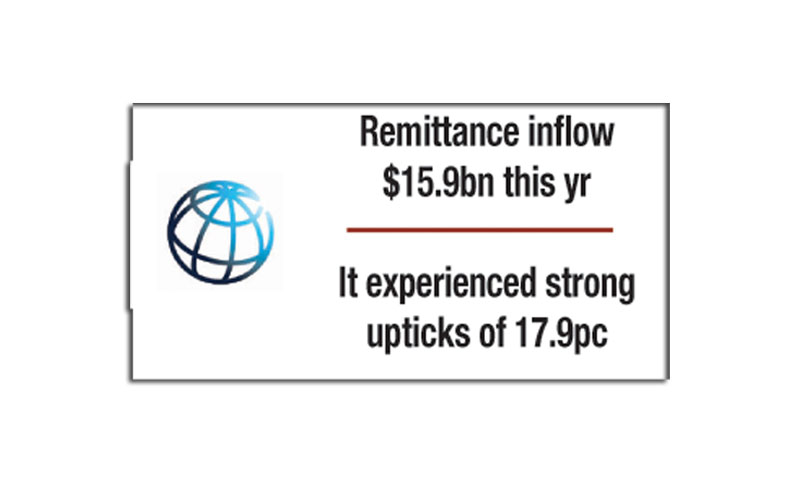 Bangladesh is the ninth highest recipient of remittances this year with US$ 15.9 billion and in South Asia it ranks third after India ($79.5b) and Pakistan ($20.9b), the World Bank said in a report Saturday, reports UNB.

Bangladesh experienced strong upticks of 17.9 percent in 2018, the bank said.

In its latest Migration and Development Brief, the World Bank said Bangladesh, after a steep decline in 2016 (-11.5 percent), remittances were flat in 2017, but remittances are showing a brisk uptick in 2018 (17.9 percent).

In 2018, the top remittance-receiving countries are projected to be India ($79.5 billion), followed by China ($ 67 billion), Mexico and the Philippines ($34 billion each) and Egypt ($26 billion), according to the global lender.

The Bank estimates that officially-recorded remittances to developing countries will increase by 10.8 percent to reach $528 billion in 2018. This new record level follows a robust growth of 7.8 percent in 2017.

Global remittances, which include flows to high-income countries, are projected to grow by 10.3 percent to $689 billion, it said.

The reports also projected that remittances to South Asia will increase by 13.5 percent to $132 billion in 2018, a stronger pace than the 5.7 percent growth seen in 2017.

“Remittances have a direct impact on alleviating poverty for many households, and the World Bank is well positioned to work with countries to facilitate remittance flows,” said Michal Rutkowski, Senior Director of the Social Protection and Jobs Global Practice at the World Bank.

However, the pace of migrant worker deployments from Bangladesh for the first three quarters of 2018 slowed by 25 percent (0.55 million, compared with 0.73 million in the same period in the previous year).

The report also noted that the Malaysian government postponed hiring Bangladeshi workers from September 2018, claiming the system was abused by a cartel of 10 recruitment agencies in Bangladesh who charged workers nearly 10 times the allowable recruitment fees of TK 40,000 (approximately $471).