Hasina – A Daughter’s Tale: A Must See Telefilm for All 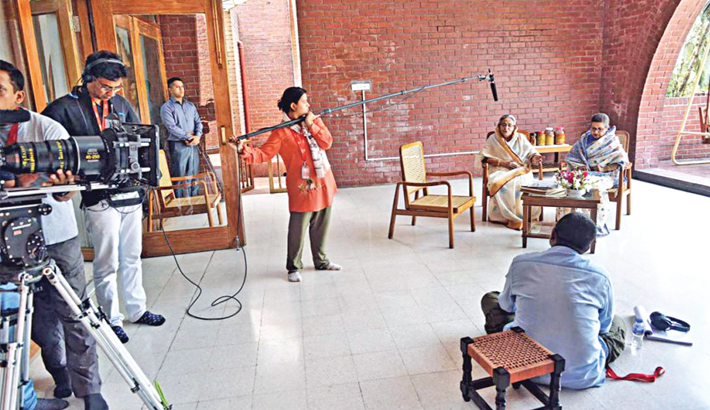 Prime Minister Sheikh Hasina is interviewed during the shooting of docu-drama “Hasina: A Daughter's Tale”, at the Gonobhaban. Her sister Sheikh Rehana is sitting next to her. —Photo Courtesy: Applebox

My class-mate during the DU days and a close friend Md. Mujibur Rahman, a first batch guerilla trained Freedom Fighter of 1971 from the world renowned Dehradun Military Academy, India, took me to the Star Cineplex at Bashundhara City, a shopping mall in Dhaka on 17th November 2018 to watch this docudrama. We saw it; we found Bangabandhu like sky-touching statesman and the other way round of the hard struggling life of Hasina, Rehana… and many more things. It is like a journey for everybody going back into history.

Piplu Khan, the director of this telefilm deserves our high commendation for producing this magnificent docudrama and presenting it before us. It is a brilliant and bold piece of telefilm-making. He is reinventing the documentary... In my view there should be no rules and no boundaries to film-making, and the impact this film has shown us…I think that Piplu is a completely independent voice, and he presents situations and past affairs back to us in a basal way.The docufilm has been carefully crafted tableaux: there’s one continuous shot where two women has a 70-minute lament, telling about aspects of their life, their parents, Bangladesh’s Founding Father Bangabandhu Sheikh Mujibur Rahman, their mother, their brothers and other relatives who were brutally put to death by some roughish military men on 15th August 1975.

The filmmaker is so present with them, you can’t help but understand what they are going through, and to understand is to feel empathy and to want to help. There is never a dull moment watching the telefilm.It is so astute and the quality of the film-making is such that it becomes something very beautiful, a meditation on life. We’re having this golden age of documentary right now and it’s being driven by technology. In the past you would need to write a script first because the editing process was so laborious but now you can shoot a whole bunch of stuff and capture life in a way that you couldn’t before and this film shows you just what level of artistry is possible.

You learn not just about the individual but also about the system in which they were living. I can’t think of any other story in our culture that can tell us so much about Bangabandhu, Sheikh Hasina, Sheikh Rehana… in our lifetime and how society is evolving as this body of work. It is illuminating and fascinating and it’s one of the things that inspired the director of the docudrama to do the work that he did.

It is the cruel poetry of detail that is so heartbreaking. It took something so horrible but found a way to go to the heart of the matter through simple details. It’s stunning in its simplicity. It’s powerful both in its observation and its analysis, which is a rare combination. This is maybe the greatest telefilm ever made in Bangladesh. It has wonderful cinema vérité footage of the “Hasina, a daughter’s tale.”

The film shoots some interviews with people and through their recollection you also have a sense of analysis and understanding rather than mere observation. So it’s combining those many things in the film that really is magnificent. It is really a film about repressed memory, and the recollection of the hard struggling life of Hasina and Rehana. It really is one of the most poignant films about the trauma of losing their parents, brothers and many others.

It is so candid and affectionate and lovely, and everyone at the screening time loved it. Not many films bear re-watching, but this one does. It is a very timely film, in terms of present political situation in the country. It shows women actively changing their lives and I found that very inspiring. So many documentaries tell you what to think. This one doesn’t – it puts you straight into the story and you get to know the characters just by watching them.

We watched this in the cinema, which was good because it’s very beautifully filmed – a real spectacle. It’s set in a reserve in Bangladesh and India. It has made something very powerful which has shown us what was really then going on in Bangladesh. It is just full of inventive and brilliant formal ideas as well as being a very beautiful film to watch. And it’s informative too.  So, the bed of it is factual, and people are responding to it

It shows you the breakdown of a society and the triumph of the greater evil once there’s a political vacuum, so it’s a very strong political film but it’s also, dare I say it, incredibly exciting. For me, this is the first great example of a film-maker being there while it’s all actually happening and there are moments in it that are utterly heartbreaking. It’s a work of great bravery and definitive historical significance.

The director and his team just observe things and then find a rhythm in his cutting room to show you the reality, usually of an institution, and the human fallibilities of institutions. The telefilm is really about the humans. It is so rare that someone’s life has been so well documented. I absolutely loved the way Hasina and Rehana told their stories using all that footage.  As a viewer, you really get to know them and understand what they went through. The film has made me realise how much of their life was not in their hands.

Even without being political, the film is political, because it shows you what life was like inside Bangladesh at a time when the only perspective you got on the country was through a news lens. This was a landmark film for me because it made documentaries popular – people who didn’t normally watch documentary films watched this. It tells the real story. The director and his team have told the story beautifully. It shows how one extremely powerful documentary can work alongside campaigning and holding demonstrations to bring about change.

Piplu always puts himself out to the nth degree; he manages to be in the right place and observe and tell the story through character. I think it’s possible because of Hasina and Rehana’s character – Hasina is warm, she’s humble, she’s sensible and she relates to people so well. It’s a brilliant film. The docudrama is a revisit the whole ordeal that the two sisters encountered. It’s a remarkable piece of documentary film-making.

It has been beautifully shot. Based on the life of Sheikh Hasina, 10th Prime Minister of Bangladesh, the film Hasina: A Daughter’s Tale covers and is referring to the assassination of Bangabandu Sheikh Mujibur Rahman along with most of her family member in 1975. This biography based documentary tries to capture a riveting story of Hasina out of a tragic backdrop. It demonstrates the captivating story of the Premier with a layered interpretation of her tragedies and triumphs. Dramatically, yet honestly, the documentary progresses to portray a daughter, a leader, and ultimately a person along with her multiple facets and her journey associated with the genesis of Bangladesh.

The trailer opens with a monologue from Sheikh Rehana, the sister of the Prime Minister, as she speaks of a dream filled with darkness and sorrow. “Sometimes I wish everything was a dream,” she says, referring to the bloodbath of August 15, 1975, when Bangabandhu Sheikh Mujibur Rahman along with most of his family members was brutally murdered. Here Sheikh Hasina has been depicted as a person who actually connects the most with the history and inceptions of Bangladesh. The filmmaker’s intention throughout the process was to convey the story in an authentic manner, unmarred by any influence which can be open to independent interpretation. Besides the history, the filmmaker sought to showcase the uncanny and unusual sides of one of the most iconic figures of our time.

It stars Sheikh Hasina herself in the title role, and her sister Sheikh Rehana in the role herself. The film featuring Sheikh Hasina upholds not only the Prime Minister but also the life sketch of an affectionate mother, ideal wife and worthy daughter of a worthy father. Through this 70 minutes heart touching docufilm the new generation can know about Sheikh Hasina’s progress of being a Prime Minister and many unknown events of her life. It is a tale of her coming Dhaka from a remote village Tungipara. It is an unprecedented presentation of history. It is a real story shown of turning into uncommon of a common woman not the Prime Minister.

Piplu Khan, director of the film tried to unfold different events with his efficiency upon description of Sheikh Hasina and her sister Sheikh Rehana. Different matters of Sheikh Hasina’s family life, struggle, politics and other unknown events are manifested in the celluloid. Radwan Mujib Siddiq and Nasrul Hamid Bipu on behalf of Center for Research and Information (CRI) produced the docufilm. Sadik Ahmed was behind the camera. It was edited by Nabanita Sen and Debajyoti Mishra was the music director. He calls his docudrama a “riveting story against a tragic backdrop which infuses universal appeal to the narrative”.

It has been shot in picturesque but real locations and that makes the actors look all the more attractive. The film has a decent storyline. It is a classy production. We wish the film to win the National Award for documentary film. It strikes a chord with the audience through his tragic portrayal of Hasina and her family members. It is a docufilm about Bangabandhu’s daughter Prime Minister Sheikh Hasina’s personal and political life. The new generation should watch this 70-minute docudrama. In short, Hasina – A Daughter’s Tale is a must see telefilm for all.