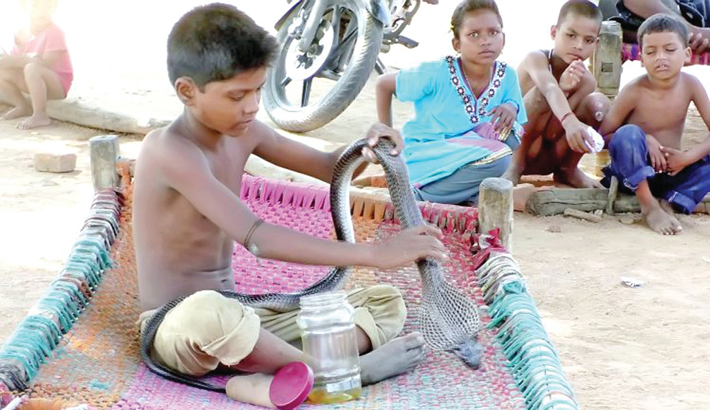 Devesh Adivasi, a 7-year-old boy from rural Madhya Pradesh, in central India, has some very unusual best friends. For the past four years, he has been going into the jungle near his village and coming back with all kinds of snakes, some of them poisonous, that he plays, bathes and eats with. So far, he hasn’t been bitten once.

The boy’s family says that his fascination with snakes started when he was 3 years old, after dreaming about the slithering reptiles one night. Next morning, he told his parents about it, but they didn’t think much of it until they saw him running into the jungle near their village and later coming out with two snakes in hand. The reptiles slithered all over his body, but they didn’t bite him. Since that day, Devesh has been going into the jungle almost every day and bringing back new friends to play with. He keeps them for a few days, bathes and sleeps with them, massages them with oil and then releases them back into the jungle.

“We have tried everything to keep him away from the snakes,” the boy’s father, Ragunath, told Story Trender. “We have explained that snakes are not meant to be friends. It is dangerous but he doesn’t listen to us.

After seeing Devesh playing with snakes for four years, most of the villagers aren’t surprised to see him surrounded by his slithering friends. They know that snakes don’t harm him, but they are reluctant to let their kids go anywhere near him when the reptiles are around. The boy’s parents claim that he currently has around 15 snake friends that he casually brings out of the jungle, including cobras. 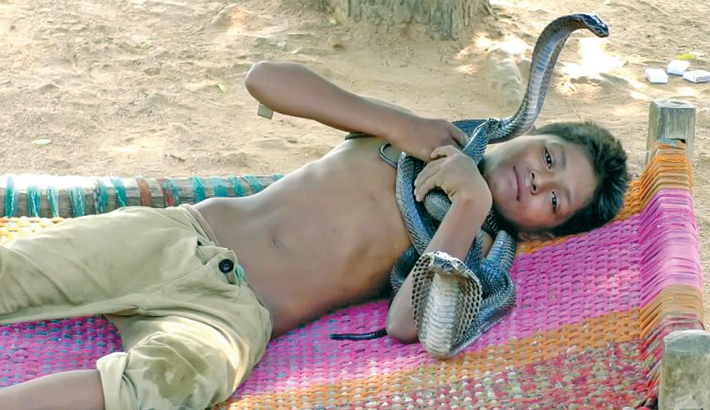 Dr MPN Khare, a general surgeon at a district hospital in Madhya Pradesh, told Caters News that Devesh’s friendship with the snakes is bizarre, and added that it can be dangerous for both his physical and mental health.

“Whether poisonous or not, snakes are not meant to be pets. And a child playing with a snake, feeding it and sleeping with it can be very dangerous for his mental health,” Khare said. “Even if these snakes haven’t bitten him yet, it is very much possible the snakes might bite him someday while he plays with them. It can install a fear that can affect him psychologically.”

Friendships between human children and snakes are not unheard of in India. Back in 2009 we wrote about the children of the Vadi Tribe who start playing with cobras at a very young age to become snake charmers, but there was also the case of a six-year-old girl who had six king cobra for friends, or that of Sidhi Siddharth Sinune, a six-month toddler who had deadly snakes for toys.