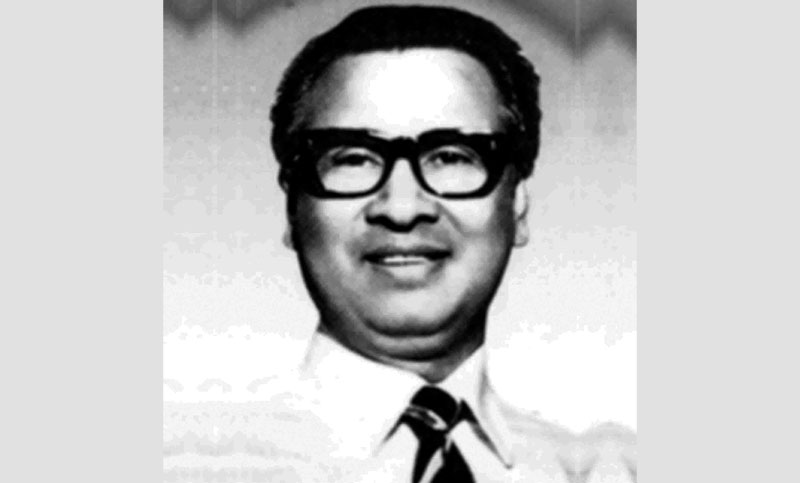 “Humanity has won its battle. Liberty now has a country.”

The lighthouse shall remain a political symbol of Bangladesh for generations after generations. Tajuddin Ahmad is the tragic hero of our glorified history. He will remain our tragic hero unto our demise. His is a ballad which is a short story in verse, which is intended to be sung with the accompaniment of music. It is opposite to the epic, which is a lengthy story in verse and Tajuddin Ahmad could be an epic novel had he been alive for a long time to serve the Bengali nation. He is a popular poem among us. In his only 50 years of age, he was put to death. Had he lived long, he could have changed the course of our history to a marvelous turn. The land he died to save from death and shame, trembles and waits hearing the spring's great name, and by his pangs the resolute ghosts are even stirred. We have a duty to remember him with due solemnity.

He was the right man in the right place at the right time. He was a representative of that giant generation during the 1971 war where the older and younger generations … he was a glorious part of that. He was on the truest side of that epical time. During our glorious Liberation War of 1971 with Pakistani military regime, Tajuddin had to create the blueprint for a successful new nation and manage obstacles coming at him from all angles. Whether it was earning the trust of Indian Prime Minister Indira Gandhi, handling internal conflicts, earning the confidence of the people of Bangladesh, foreign recognition of Bangladesh, strategic planning of the war, motivating and inspiring freedom fighters, forming the armed wing of the government called 'Mukti Bahini' (Liberation Forces) under an united command with the assistance from the Indian army, gathering resources to fight a long battle with a powerful and highly trained enemy. Tajuddin was at the heart of all. He led the war with remarkable diplomacy to finally achieve freedom from the Pakistani colonial occupation.

“Tajuddin’s life events – albeit in minuscule degree of intensity – had trained him to manage this mammoth task. As a forthright young man, he had challenged the anachronistic politics of the aristocratic elite in pre-partition Bengal. Now he would challenge the machinations of a genocidal Pakistan military.” For Tajuddin, confederacies came in the shape of Khandaker Moshtaque Ahmed, Minister for Foreign Affairs and Law, and a group headed by Sheikh Fazlul Haque Mani. Both set aimed to undermine Tajuddin’s leadership and were constant thorn in his life. It was not easy being a prime minister and running the newly formed government. Sheikh Mani claimed that Bangabandhu gave him the order to run a revolutionary force to free the country. When the party was bridled with pettiness within its own domains, Tajuddin was busy uniting a nation. He had to fight against two forces within the government- the opposing, unhappy leaders like Khandakar Mushtaq, and the young, aggressive force of Mani. The intellectual in him was prepared to withstand the challenges his fellow Awami Leaguers were throwing at him.

He came under political assault the moment he took that considered step. He was not, said these angry young men, qualified or empowered to establish a government because he had not been authorised by Bangabandhu to do so. It was an unfased Tajuddin who went ahead with what he saw as his historic mission of bringing Bengalis together. The socialist in him was unwilling to cave in to fate or human machinations. The intellectual in his being was prepared to withstand onslaughts of the kind his fellow Awami Leaguers were throwing his way. He emerged from the experience a sadder man but necessarily a stronger man.

For his part, whether it was his first broadcast to the nation following the formation of the new government on 11 April 1971 or his broadcast on the eve of victory on 8 December 1971, Tajuddin’s spoke mainly the language of peace. He warmly congratulated the unarmed people of Bangladesh for offering heroic resistance to the occupation Army of Pakistan and highly praised the freedom fighters. He also reminded them not to take any aggressive action against innocent people including the non-Bengalis. Many of his colleagues were charged as a roving ambassadors with the unenviable task of reaching out to leaders for international recognition and support at the time or Indians like Golok Majumder, the senior Border Security Force (BSF) officer in West Bengal, have vouched for his capability as a wartime administrator and had openly declared that had anybody else other than Tajuddin had been at helm, Bangladesh may never have won the war as quickly as it did or even achieved independence.

Pakistan authorities projected the war as a battle of Islamic Pakistan versus Bengali miscreants and Indian chancers. For them they were the rightly-guided Muslims hoping to silence the rebellious traitor Bengalis led astray by pagan Indians and save Pakistan in the process. And if this silencing meant killing them then so be it. They were happy and willing to do that freely. The Pakistan military sought the help of a small section of Bengali collaborators to help them in this mission. The task of re-educating these Pakistani attackers and their mango-twigs on the basic fundamentals of Islam which promotes peace upon mankind was left to a clandestine radio channel called “Swadhin Bangla Betar Kendra” (Independent Bengal Broadcasting Centre). The channel sought the advice and guidance of Tajuddin Ahmad who was very knowledgeable on the core principles of Islam.

In a lot of ways his life is a tragic story. He was on top of the Bangladesh’s world. Then everything unravelled — fast, but it did. He definitely has an indelible legacy among his patriot colleagues. That song —his life, so much, but the song — is revered. But as far as the song is concerned, that’s going to be a long, long positive legacy. Who among us can’t sympathise with him? Tajuddin Ahmad is a tragic ballad of Bangladesh’s history. Peppered with lore and the authentic heart of the people in Tajuddin's classic ballads, this is an epic book that paints his brave action and his comrades against a landscape of some thuggish characters. His harrowing battle descriptions compete with inimical pert of men shares history and legend like no one else. Both a novel of war and his pure actions, crafted with heart and depth, his life story celebrates one of Appalachia's finest hours.

Forty three years are on, we still remember him with due honour and he shall remain in our thoughts and prayers unto the civilisation of Bangladesh exists. For him, the pain still is fresh in our minds. He has now come back again. Remembering him just makes us very sad. His patriotism, courage and experience as a skilled politician helped bolster his chances of becoming the cardinal leader of the Mujibnagar Government in exile to establish Bangladesh in 1971 giving a crushing defeat to the mighty Pakistani military junta. It was the kind of person he was and the intangible qualities that he possessed that led to his position as Prime Minister. Those who spent some time working with Tajuddin and saw what kind of a person he was: not forcing anyone’s hand, only thinking about doing good, how to bring about an independent and sovereign country for us as faster as possible.

He wanted freedom for Bangladesh and its people. Despite his good intentions, his qualities and character that placed him in his position of power also placed him in a position to die at the hands of some

treacherous people. Even standing before the point-blank gun shots and bayonet charges on 3 November 1975, he held true to his values and standing stoically in the face of death. He was a man of principles, but unfortunately, it was his principles that led to the death of Bangladesh’s tragic hero, Tajuddin Ahmad. His political acumen and foresight during turbulent times aside, the quieter moments really give us insight into the essence of the man’s soul. He had sworn not to return to family life until the country was liberated to demonstrate solidarity with the men out on the battlefields.

On 16 December 1971 the Pakistan army surrendered to the joint command of the Mukti Bahini and the Indian army. Bangladesh thus emerged as an independent state in less than nine months after the Declaration of Independence. As the principal political figure, Tajuddin Ahmad was surrounded by journalists who asked him about his reaction. He broke into tears and said that he had performed his duty "merely as a midwife" and that he felt "sad" for not being able to "deliver the news of the child’s birth to its father" Sheikh Mujib. Even though the credit for the victory goes to a large extent to Tajuddin Ahmed, he never claimed any recognition for his achievement. He categorically told that nobody other than Bangabandhu should be given any credit for the victory of Bangladesh.

During the political negotiations between Bangabandhu and his team with President Yahya Khan and his team for so-called power transfer during the month of March in 1971, Tajuddin’s meritocracy outshone everybody present there. ZA Bhutto’s right-hand powerful man like Barrister Mahmud Ali Kasuri was filled with wonder or astonishment; and greatly surprised to have found a true combatant in Tajuddin who was able to defeat his rivals by his logic, and reasonable judgment. Even Pakistan’s senior most and highly respected lawyer Barrister AK Brohee was stunned with superior abilities of Tajuddin Ahmad because of his high or superior quality or performance. Tajuddin Ahmad was one of the most sought after political characters in Bangladesh’s history.

Tajuddin Ahmad’s life is definitely a page-turner. The closer we get to the end of his story, the faster we need to remember him with adoration. He is like a written work, usually a novel or a story of lassitude or a tragic drama, which is of importance enough to keep us engrossed and wanting to finish it. One can never forget the sadness and lugubriousness of that morning of November 3, 1975. Noted educationist Prof Dr. Khan Sarwar Murshid once said, “Disremembering is equivalent to perfidy.” I was then a college student, but when I still close my eyes, I can clearly remember his handsome and bright face when I took lunch with him sometime towards the end of 1970 just before the national elections of the then Pakistan at my maternal grandfather’s house at Maison Mia Bari, Kapasia under the Gazipur District. We should commemorate this golden son of Bangladesh every day. Every year, there should be state sponsored memorial services for him and his three other paisanos.

Nations are always their narrations. This is the main reason that compels us to pay certain tribute to the past. Therefore, we have to honour past events, the story itself and most importantly our beloved leaders who accomplished such grand patriotic jobs to establish our own homeland in 1971. This is a way of honouring by the future itself.

The writer is a senior citizen, writes about politics, political and human-centred figures, current and international affairs.