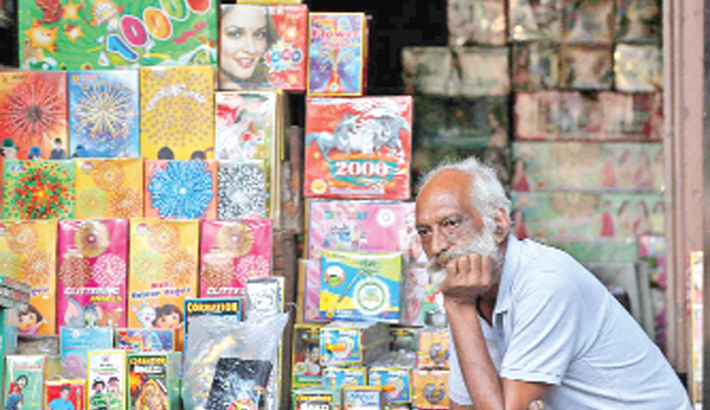 NEW DELHI: Rajesh Tyagi stands outside his decades-old fireworks stall in Delhi’s old quarter, fuming over a court ruling that allows him to sell only “eco-friendly” fireworks for the Indian capital’s largest festival, reports AFP.  “There is no such thing as a green firecracker in India,” says an exasperated Tyagi, in an empty alleyway usually buzzing with customers buying rockets and bangers ahead of Diwali, the Hindu festival of lights.

The Supreme Court has ruled only environmentally-friendly crackers— that emit less smoke and soot than normal ones—can be sold in the Indian capital, in a last-ditch bid to curb smog in the world’s most polluted major city.

Delhi’s record-setting pollution is at its worst around this time of year, when tens of millions celebrate Diwali by setting off firecrackers late into the night.

Revellers in the city of 20 million wake the next morning to find the fumes have mingled with car exhaust, factory emissions, construction dust and smoke from crop fires to form a thick, soupy haze.

Landmarks fade in the smog and visibility plunges to mere metres in parts of the city as cooler air traps poisonous particulates close to the ground.

But Tyagi—who along with other vendors shut his shop and went on strike against the court’s decision—said so-called “green crackers” are a myth.

“I have been in this business for 35 years, and I haven’t seen or heard of this product,” he told AFP.

“These authorities issue orders from their air-conditioned rooms and we suffer from their ignorance.”

However he added that they would not be available in time for Diwali, on November 7.

Indian researchers have been working on other prototypes of the eco-friendly cracker.

The Indian Institute of Science Education and Research in Mohali, about 250 kilometres (150 miles) north of Delhi, claims to have developed a rocket that releases no soot, particles or smoke.

But this model, and others like it, is still only in the test phase.

The Petroleum and Explosives Safety Organisation, which regulates the firecracker industry in India, told AFP no licences had been issued for low-emission crackers.

The Supreme Court imposed a total ban on fireworks for Delhi during Diwali last year, angering not just businesses but revellers who felt it unfairly targeted Hindu festivities.

Activists, however, were hoping for a repeat of the ban this year, and questioned how authorities would enforce the “green cracker” ruling.

The United Residents Joint Action of Delhi group tweeted that it would be “impossible to monitor”, and that “the state has no capacity to enforce” the law.

Citizens, the group added, would be left to make their own “informed choice” on which fireworks they purchase.

Those celebrating outside the capital can fire normal crackers but only between 8 pm and 10 pm in the evening, on the night of Diwali.

Pollution in Delhi has soared to unhealthy levels a number of times in recent days, even before the festival and upcoming wintry weather, which will push them up further.

Air quality data collected by the Indian government showed even higher readings of PM2.5, the smallest and most harmful airborne pollutants.