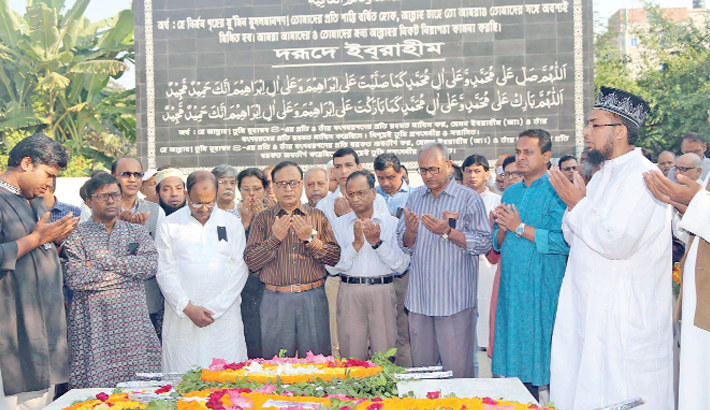 Rajshahi University Vice-Chancellor Prof M Abdus Sobhan, along with others, offers prayers after placing wreaths at the grave of Shaheed AHM Kamaruzzaman, one of the four national leaders assassinated on Nov 3, 1975, in the city’s Kadirganj graveyard marking the Jail Killing Day. — sun photo

RAJSHAHI: The mournful Jail Killing Day was observed in the city on Saturday paying rich tribute to the four national leaders assassinated inside the Dhaka Central Jail on this day in 1975.

City unit of Bangladesh Awami League and its front-organisations observed the day through various programmes paying due homage to the martyred, reports BSS.

Marking the day, scores of wreaths were placed on the grave of Shaheed AHM Kamaruzzaman, one of the four national leaders, in city’s Kadirgonj family graveyard besides mourning rallies and garlanding of portraits of Father of the Nation Bangabandhu Sheikh MujiburRahman and four other national leaders at Awami League party office. 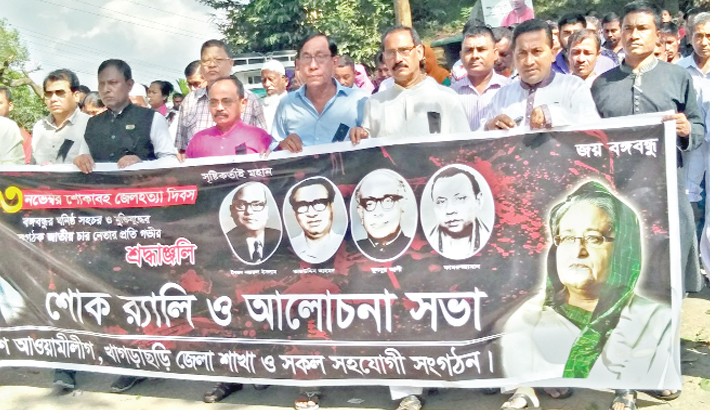 Khagrachhari district unit of Awami League and its associate bodies, led-by lawmaker Kujendra Lal Tripura, take out a mourning procession in the district town on Saturday on the occasion of the day.             — sun photo

City unit Awami League president and mayor of Rajshahi AHM KhairuzzamanLiton and other front-ranking leaders joined the rally, among others.

In observance of the day, Awami League arranged Quran Khwani, Doa Mahfil and feeding of destitute in all 30 wards of the city.