Ami O Rabindranath to be staged at Mahila Samity today 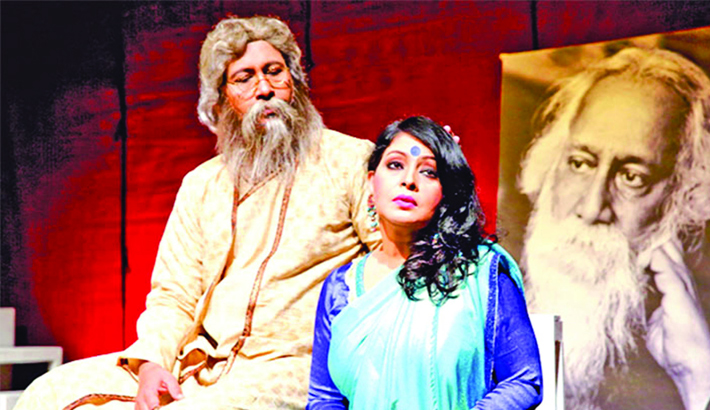 Prangane Mor, the popular theatre organisations of the country, is going to stage its much-acclaimed production ‘Ami O Rabindranath’ today at 7:00pm at the Nilima Ibrahim Auditorium of Bangladesh Mahila Samiti in the capital as a part of the five-day theatre festival titled ‘Rabindranth-e Panchdin Prangonemor’.

As a part of the festival, the troupe stages five Tagore plays at the Bangladesh Mahila Samiti.

Ami O Rabindranath, scripted and directed by Nuna Afroz, depicts Tagore’s life and works through an eye of his devoted reader. In the story of the play, Athoi visits the famous Shilaidaha Kuthibari (former residence of Bengal’s most celebrated poet, Rabindranath Tagore) in Kushtia along with her friends.  There, she begins to explore Kuthibari and begins to ascend the steps of the staircase. Suddenly, Rabindranath himself appears before her.  He offers to show Athoi around Kuthibari. In a trance, Athoi completely loses focus from her friends and reality. She begins speaking to Rabindranath. A 29-year-old, 69-year-old, 21-year-old and also 80-year-old Rabindranath appears before Athoi.

With the images of all different ages, the writer discusses his work and phases of the different times of his life with Athoi. With Tagore’s various transformations in age, Athoi also begins to transform in age. Different aspects of Rabindranath’s life are shared through the different phases portrayed in the play.

On the first day of the festival, Prangonemor staged its sixth production ‘Shesher Kobita, based on the Rabindranath Tagore’s novel with the same title, which is directed by Nuna Afroz and scripted by Ananta Hira. Widely termed a landmark in the realm of romantic Bangla literature, Shesher Kobita is mainly a much popular fiction by Tagore.

On the second day of the festival, Prangane Mor staged ‘Shayma Prem’ adopted from Rabindranath’s famous dance drama ‘Shyama’. ‘Shyama Prem’, which has been written by Nobel Laureate Rabindranath Tagore and directed by Ananta Hira, incorporates the theme of love, freedom and humanity. The play depicts the story of a girl, namely Shyama. She is a very simple girl of a peasant family, but a tyrant landlord plunders her from a scare-free life to enjoy her dancing.

Tomorrow, on the second day of the festival, Prangonay Mor will stage their production of Rabindranath Tagore's play ‘Rokto Korobi’ at the Bangladesh Mahila Samiti.

The play features a fictional world called “Jagnapuri” (sacrificial ground) where there is only wealth and no humanity.

Another production titled ‘Char Adhyay’ based on Tagore play will be staged on September 6.  The play has been directed by Nuna Afroz.