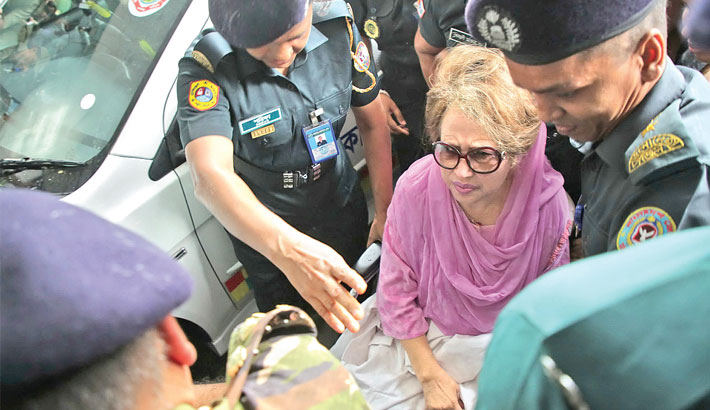 BNP chairperson Khaleda Zia is taken to Bangabandhu Sheikh Mujib Medical University for treatment on Saturday when she was admitted to the hospital. — sun photo

Before taking her to the hospital, her personal belongings were brought there from the old Dhaka Central Jail.

Khaleda, a 73-year-old former prime minister, was kept on the sixth floor of cabin block at the hospital.

Fatema Begum, house help of the BNP chief, also came to the hospital. Many leaders and activists of the party gathered at the hospital, but police did not allow them to visit Khaleda Zia.

The High Court on Thursday directed the government to immediately admit Khaleda Zia to BSMMU and form a 5-member medical board afresh for her treatment.

On Saturday, the five-member medical board headed by Professor Dr Abdul Jalil Chowdhury, chairman of medicine department, was formed.

Khaleda Zia remained in jail for the last eight months after she was sentenced to five years’ imprisonment in Zia Orphanage Trust corruption case on February 8.

On April 7, she was taken to BSMMU for medical checkup.

On September 16, a medical board formed by the government for jailed Khaleda, suggested admitting her to a hospital like BSMMU though they have found ‘no symptom of any serious disease’ in her.