Only 13pc use internet in Bangladesh! 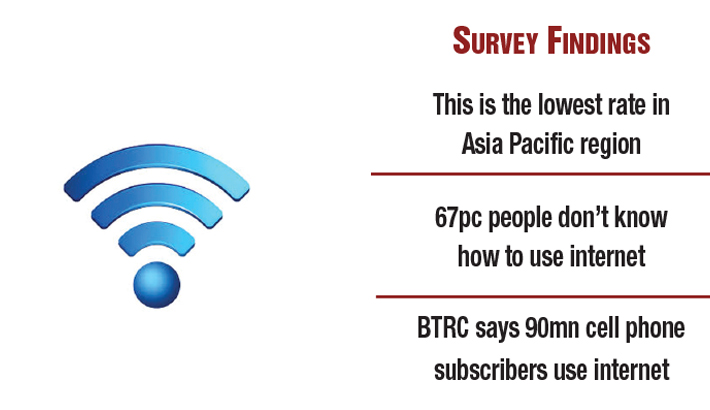 A recently released research report shows that only 13 per cent of Bangladeshis aged between 15 and 65 use the Internet and social media.

The survey report of AfterAccess, a large-scale data collection initiative aimed at compiling comparable ICT indicators for countries of the Global South, was released by regional ICT-policy think-tank LIRNEasia in the city on Tuesday.

As part of the survey, 2,000 households and individuals were surveyed from 100 wards and villages in 40 districts in late 2017.

The sampling methodology was designed to ensure representation of the target group (population aged 15-65).

“This report highlights key issues in our telecommunications sector and provides deep insights on the disparity in use of mobile phones, Internet, social media and platforms,” said Abu Saeed Khan, Senior Policy Fellow of LIRNEasia.

Sixty-seven per cent of Bangladeshis aged 15-65 who do not use the Internet said the main reason for not using the Internet is that they do not know what it is. This finding highlights the importance of creating awareness on the Internet and its uses among the population.

According to BTRC, around 90 million cell-phone subscribers use the Internet.