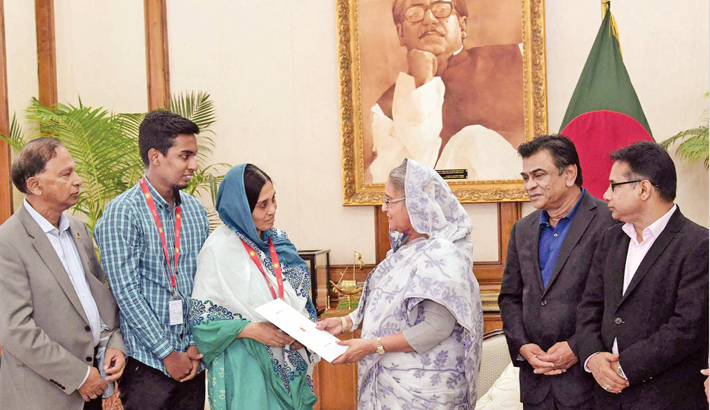 Prime Minister Sheikh Hasina hands over the deed of a residential flat to a family member of a former player at a function at the PM’s official Ganabhaban residence in the capital on Thursday. - PID PHOTO

Prime Minister Sheikh Hasina on Thursday handed over the keys of residential flats located in the city’s Mirpur area to the families of two former national footballers and a hockey player, reports UNB.

The footballers are Sheikh Ashraf Ali and late Monem Munna and the hockey player is late Zahidur Rahman Pushkin.

The Prime Minister handed over the keys of the flats to Sheikh Ashraf Ali and Monem Munna’s wife Yasmin Monem and Pushkin’s wife Fahmida Rahman at a function held at the Prime Minister’s official residence Ganobhaban.

The flats were provided to them at the personal initiative of Prime Minister Sheikh Hasina for their outstanding contributions to the country’s football and hockey.