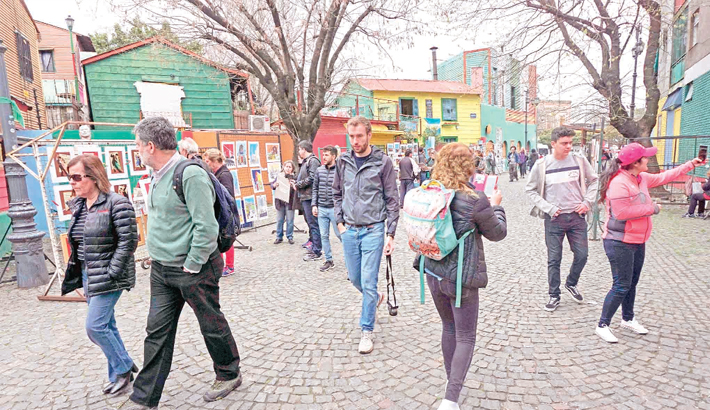 Tourists visit the traditional street museum Caminito in La Boca neighbourhood in Buenos Aires on Friday. Foreign tourists have been favoured as the peso has lost more than half of its value against the dollar since the start of the year -- as Argentina battles to stave off an economic crisis.

BUENOS AIRES: Argentines may be feeling the pinch of their country’s economic woes, but for tourists, the troubled peso is proving a holiday boon.

Brazilian Pedro Perreira de Azevedo has been rubbing his hands in delight after his family holiday, with his wife and three children, turned out cheaper than expected, reports AFP.

When they arrived from Belo Horizonte in the east of Brazil on September 5, the peso had just lost 20 percent of its value in the wake of President Mauricio Macri announcing Argentina would ask the International Monetary Fund to advance a $35 billion loan to help prop up an economy in crisis.

With the peso having lost half its value against the dollar since the start of 2018, the Brazilian real looks strong in comparison despite its own difficulties — it has itself dropped from around 3.3 to 4.1 since January 1.

“We were able to buy whatever we wanted and visit all the tourist sites in Buenos Aires,” added Perreira de Azevedo.

“At Boca Juniors’ stadium we even had a VIP visit!” added one of his daughters excitedly.

Not far from the iconic Bombonera stadium in the rugged La Boca neighborhood, Lori Berho, an American living in Chile and on holiday with her brother, said she felt lucky to have been able to benefit from such a favorable exchange rate.

“Last night we were able to enjoy a complete restaurant meal for two for $60 when normally it would have cost $100,” she said.

The struggling peso has left tourist guides a touch out of date.

“When you read the tourist guides they say things cost more in Argentina then elsewhere in Latin America, but over the last 10 days we’ve spent less than we expected,” said a young French tourist, Pauline Gauthier, meandering though the historic streets of San Telmo with her partner.