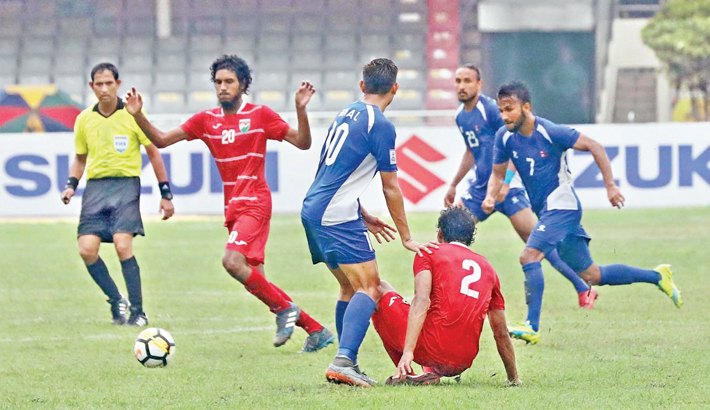 Players of Maldives and Nepal vie for the ball during their SAFF Suzuki Cup 2018 semi-final at Bangabandhu National Stadium in the capital on Wednesday. Maldives won 3-0 and sealed their spot for the final. — SUN PHoTO

After a day full of actions in the semi-finals of SAFF Suzuki Cup 2018, defending champions India and Maldives earned esteemed victories against their respective opponents Pakistan and Nepal to claim the last two spots for the final of the football tournament.

The two finalists will lock horns with each other for the SAFF glory on Saturday 7:00pm at Bangabandhu National Stadium (BNS) in the capital.

In the first semi-final in the rain-hit stadium in the city, the Maldivian boys stunned the Himalayan boys by 3-0 goals. The game was stopped for about half an hour due to rain and thundershower.

Maldives skipper Akram Abdul Ghanee scored one goal while Ibrahim Waheed scored two goals in a span of only two minutes for their side, which dominated the first half by a solitary goal.

Maldives displayed different mindset and attack throughout the match which saw them finishing on top against Nepal.

The second semi-final between India and Pakistan had a nervy first half with frequent pressings from Indians while Pakistan were fighting back from counter attacks.

India got the expected lead in the early second half (48th minute) when Manvir Singh’s right footed shot from the left side of the six yard box find the nets of Pakistan.

Manvir netted his and team’s second goal in the 69th minute and his teammate Sumit Passi scored in the 84th minute of the match to cement their place in the final.

Pakistan’s Hassan Bashir scored the consolation goal for their side the 88th minute.

However, seven-time SAFF champions India had the last laugh of the day with 3-1 result in the scoreboard.