Outer Ring Road in Ctg to open to traffic by Dec 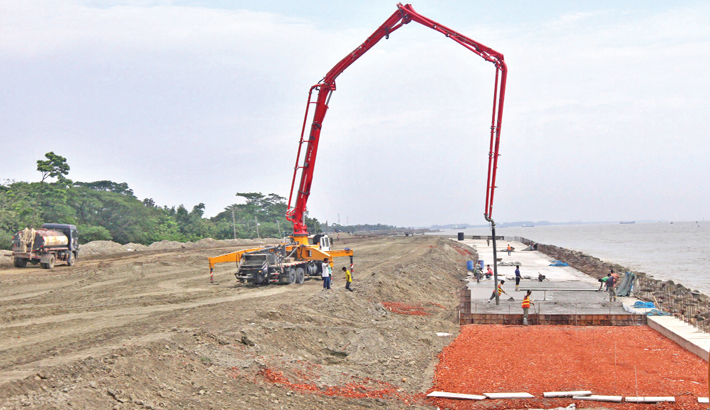 Construction works on Chattogram City Outer Ring Road project are going on in full swing. The photo was taken from the city’s Patenga Sea Beach area on Monday. - RABIN CHOWDHURY

Chattogram Development Authority (CDA) is going to open the under-construction ‘Chattogram City Outer Ring Road’, first of its kind, for traffic movement by December this year to ease gridlock in the port city.

Sources in the CDA said pressure of traffic will increase several times in the city after starting construction works of the 16.5-kilometre elevated expressway from Lalkhan Bazar to Chittagong Shah Amanat International Airport.

Construction works of the ‘Outer Ring Road’ is now going on in full swing to open it by the time, said CDA officials involved with the project.

However, other works of the much-awaited project will be carried out gradually within June next year.

The road primarily will be made fit for traffic movement. Then it will be developed as per project plan, they said.

The tourist spot will be developed with all modern facilities from the existing Patenga Sea Beach to five kilometers of the total 17km-long road project.

Walkway, sitting arrangement, kid’s zone, four jetties for sea cruise, car parking and toilet facilities will feature the tourist spot on the bank of the Bay of Bengal.

With the aim to give an eye-catching look at the tourist spot, the shops that developed earlier obstructing the eye-view at the beach have already been evicted.

The traders were also compensated and rehabilitated at the new spot.

While visiting the project site on Monday, this correspondent noticed that massive earthworks of the road and embankment had been going on marking a progress of over 70 percent of the project.

CDA has been constructing the 17Km long and 90-foot wide four-lane road on the existing coastal embankment stretching from Patenga to Faujdarhat area under the project.

The project aimed at protecting the Chattogram city from flood and tidal surge through strengthening the coastal embankment, easing traffic congestion through bypassing the heavy vehicles from the city and encouraging trade, industry, tourism and foreign investment through development of the areas.

Starting construction work of the project involving around Tk 2,500 crore in April in 2015, CDA has been strengthening the coastal embankment and raising its height from existing 20-23 feet to 30 feet above the mean sea level to save the coastal areas from natural calamities.

The works which are now going on include constructions of pavement from chainage 3km to 12km, flyover in Sagorika area, three sluice gates, and sitting deck slab on three bridges at 5km, 11Km and 14km.

Works of embankment filling from chainage 12Km to 15.2Km is at the ending stage, they said.

Moreover, constructions of slope protection from chainage 5.6Km to 12Km, sheet pile driving for the wave deflected wall within 5.50km and casting of the three bridges after piling works, pile cap and pier cap construction have already been completed.

CDA is also taking care of some other issues during construction of the ring road to be connected with approach road of the under construction Karnaphuli tunnel.

He hoped that they will be able to open the road for traffic movement by December this year.

The PD informed that south Chattogram-bound vehicles from Dhaka and other parts of the Country will enter the ‘Outer Ring Road’ through Faujdarhat area.

The vehicles will reach the mouth of the under-construction tunnel through the road and cross the tunnel beneath the river Karnaphuli to reach the South Chattogram, said Hasan, also superintendent engineer-1 of the CDA.

Mentionable, the Executive Committee of the National Economic Council (ECNEC) approved the project with an estimated budget of Tk 856.29 crore on March 29 in 2011.

CDA is also implementing the 16.5-kilometre elevated expressway from Lalkhan Bazar intersection to airport to facilitate traffic movement in the city.

The ECNEC approved the Tk 3,250.84 crore mega project, first of its kind in Chattogram, on July 11 last year.