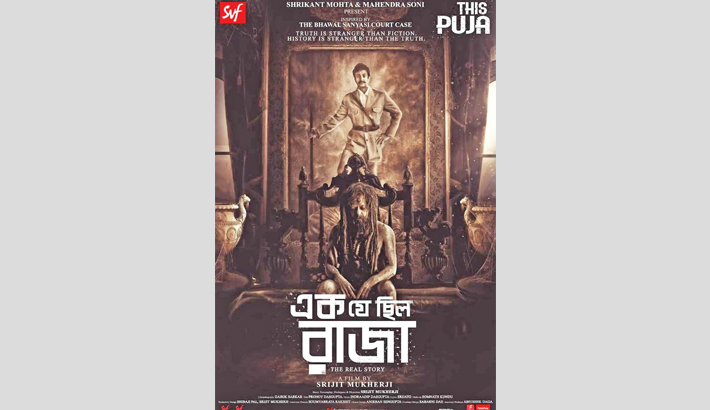 The movie is entirely based on the lore of Bhawal Sannyashi, the controversies regarding the return of presumably dead prince of Bhawal estate Ramendra Narayan Roy who was presumed dead and was cremated in 1909.

However controversies arose when a mysterious Sannyashi visited Bhawal estate in 1921 and claimed that he is Ramendra, the King of Bhawal.  This phenomenal event shook the then British India and Ramendra was accused as an imposter.

Cases were filed for and against the accused and this feud went on for 16 years when Privy Council in London ruled in favour of Ramendra in 1946.  The 2 minute and 14 seconds long trailer opens in a gloomy courtroom where a pleader addresses the court seeking permission to present a man named Raja Mahendra Kumar Chowdhury. This character is based on Ramendra Narayan Roy.

In various shots afterwards flashbacks are shown in the trailer picturing the colourful life of Ramendra. Several other major characters are also either introduced or hinted.

The trailer ends by putting up the question is the claim of Mahendra alias Ramendra Narayan Roy legitimate or not.  'Ek Je Chhilo Raja' is directed by prominent Tollywood director Srijit Mukherjee. Jisshu Sengupta is starring as Mahendra Kumar Chowdhury. The cast also includes Jaya Ahsan from Bangladesh who plays the sister of the Bhawal King.

Other cast members are Rajnandini Paul, Anjan Dutt, Aparna Sen Rudranil Ghosh and others.  The film is set to release in late October this year in India under the banner of Sree Venkatesh Films.